Rare Navajo Weavings to be Featured at the MHCAM 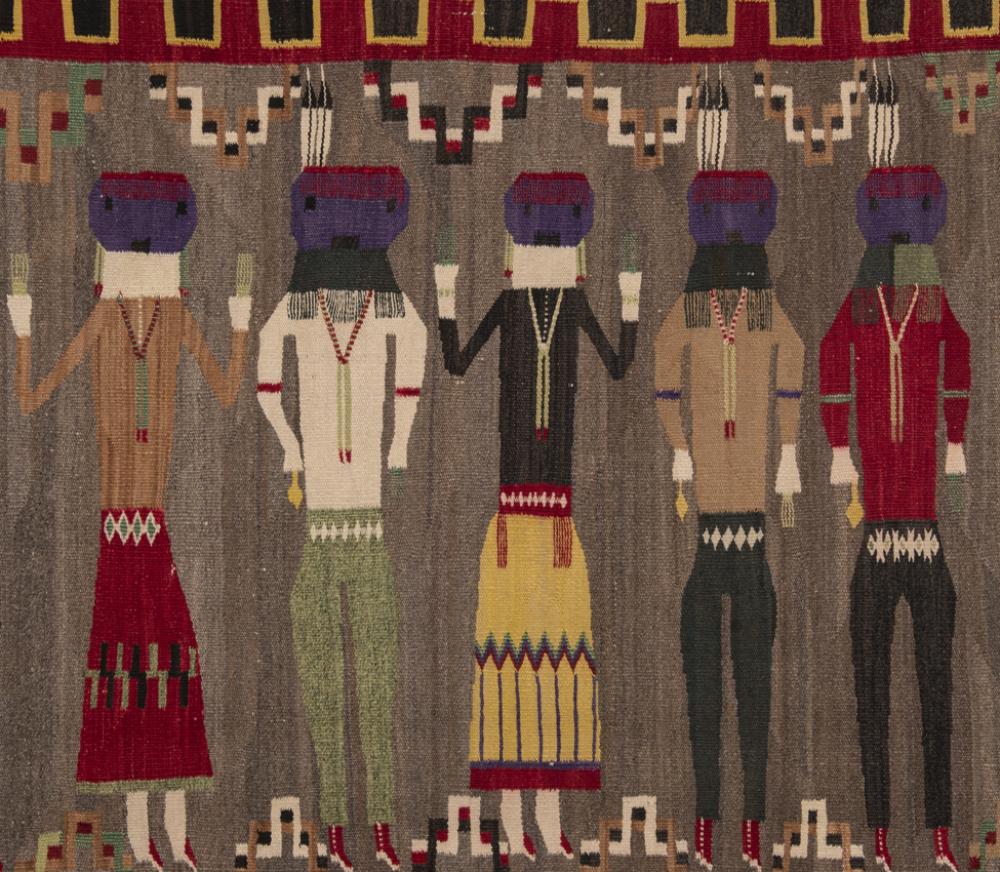 Dancers of the Nightway: Ceremonial Themes in Navajo Weavings and two related collection spotlights will open January 19. Fragile Paper Timeships: Photographs by Joel Meyerowitz, 1979-1989 opened in December and continues through May 29.

Dancers of the Nightway: Ceremonial Themes in Navajo Weavings
January 19 - May 29, 2016
Curated by Rebecca M. Valette '59 and Jean-Paul Valette, this exhibition presents a selection of rare Navajo textiles known as Yeibichai weavings.

The Navajo have a history of textile production dating back centuries. With the arrival of both traders and tourists to the American Southwest in the 1880s, Navajo weavers, who were almost exclusively women, found a regular market for traditional geometric patterned rugs and blankets. In the early twentieth century, some creative weavers were encouraged by traders to incorporate ceremonial imagery into their designs. Dancers of the Nightway examines 17 of these unusual pictorial weavings, dating from the 1910s to the 1940s. Complementing the weavings are a selection of photogravures by Edward Curtis as well as meticulously detailed, figurative carvings by Clitso Dedman, which depict the participants in the Yeibichai dance, the evening conclusion of an important Navajo curative ceremony called the Nightway.

The Nightway occurs during the cold months of the year and invokes a special category of supernatural beings called Yeis, and their leader, Yeibichai. During this healing rite, the Yeis are impersonated by masked and ceremonially attired individuals. Deeply protective of their complex spiritual life, the Navajo historically held this and other ceremonies in remote locations and prohibited the reproduction of associated sacred imagery.

The innovative artists of Yeibichai weavings portrayed dancers impersonating the Yei divinities rather than the actual Yeis, thus meeting the demands of an Anglo-American clientele seeking symbols of Native American spirituality, while also respecting traditional prohibitions. Their results are lively and imaginative secular interpretations of ceremonial themes.

The Valettes have been collecting, curating exhibitions, and writing about Navajo figural weavings and associated objects for more than 30 years. Their books and other publications on the topic have added significantly to the scholarly literature.

Rebecca M. Valette '59 will deliver a lecture titled "Dancers of the Nightway in Navajo Weavings" at 5:30 p.m. Thursday, February 4, in the Mount Holyoke College Art Building's Gamble Auditorium, followed by the Museum's spring opening reception. Assistant Professor of History Christine DeLucia will give an Art à La Carte Gallery Talk about the exhibition, 12:20 p.m. Friday, February 19, in the Museum.

The Museum will also feature an exhibition of vintage color photographs by Joel Meyerowitz, recently donated to the museum by a syndicate of collectors, as well as two collection spotlights.

Curated by Lynda Teller Pete, a fifth-generation weaver from the Newcomb and Two Grey Hills areas of the Navajo Nation, this collection spotlight focuses on a ca. 1935-1940 Navajo weaving of Yei figures. As a complement to the concurrent exhibition Dancers of the Nightway: Ceremonial Imagery in Navajo Weaving, Pete shares her personal history and deep knowledge of Navajo weavings to offer her perspective on the choices that Navajo artists made in the first part of the 20th century. Although many of the weavers from this period remain unidentified, their traditions and voices live on through their textiles and through the stories of their descendants.

What should be considered art, and how do we define terms like fine art, decorative art, craft, and utilitarian? This collection spotlight, curated by Mount Holyoke College history major Allyson LaForge '16 examines 19th- and early 20th-century objects made by Ojibwe, Haida, and Apsáalooke (Crow) craftspeople to discuss a category of material culture often described as tourist items or souvenirs. Though created for the market, these items represent the hybridity of traditional Native American art forms and the external influences of the tourist economy. By embracing the American economy, Native communities became active participants rather than passive actors.