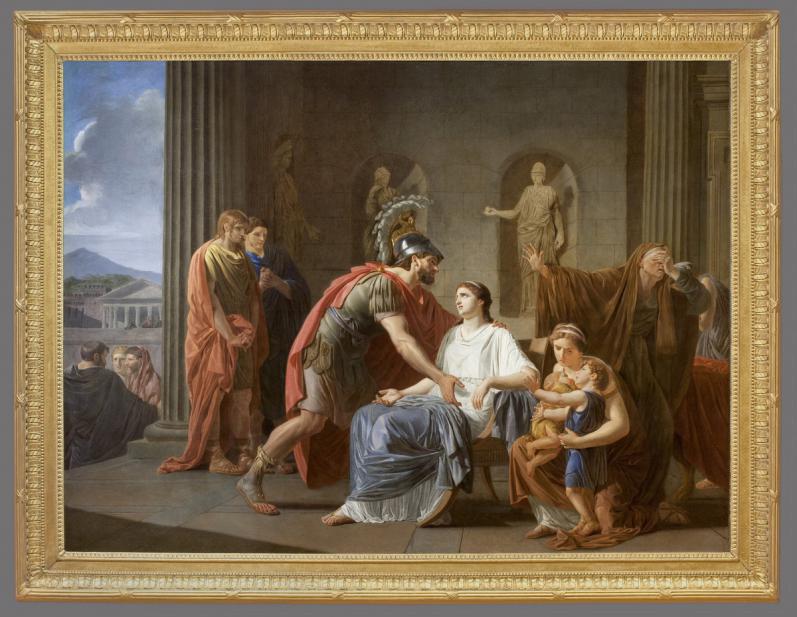 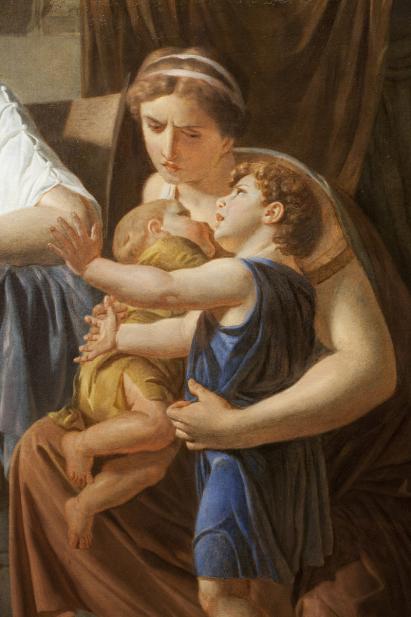 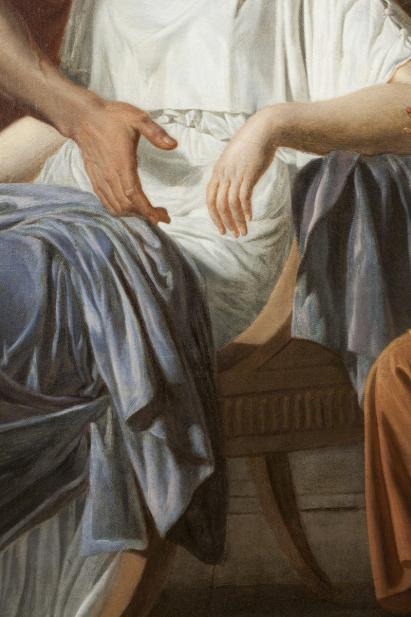 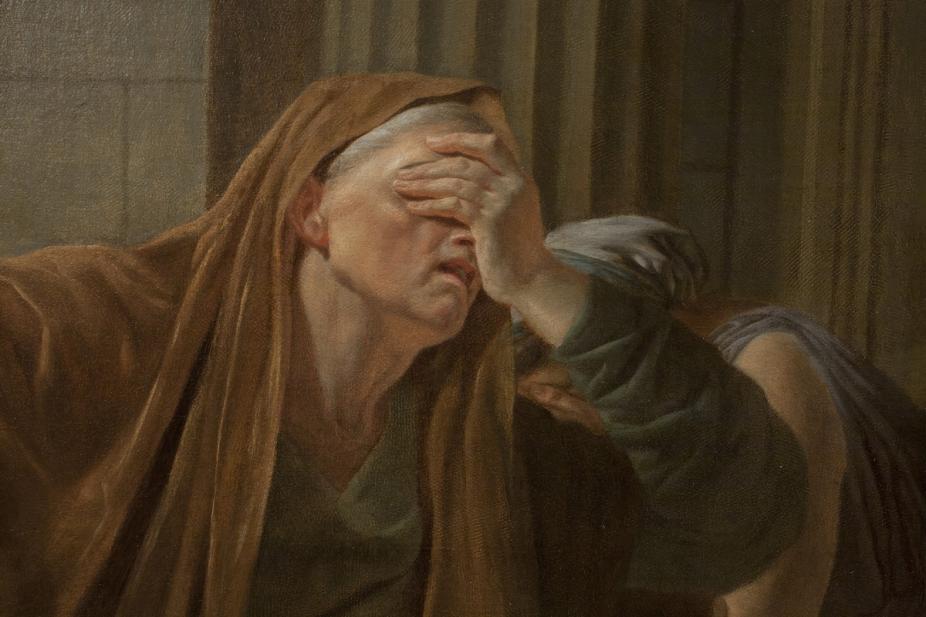 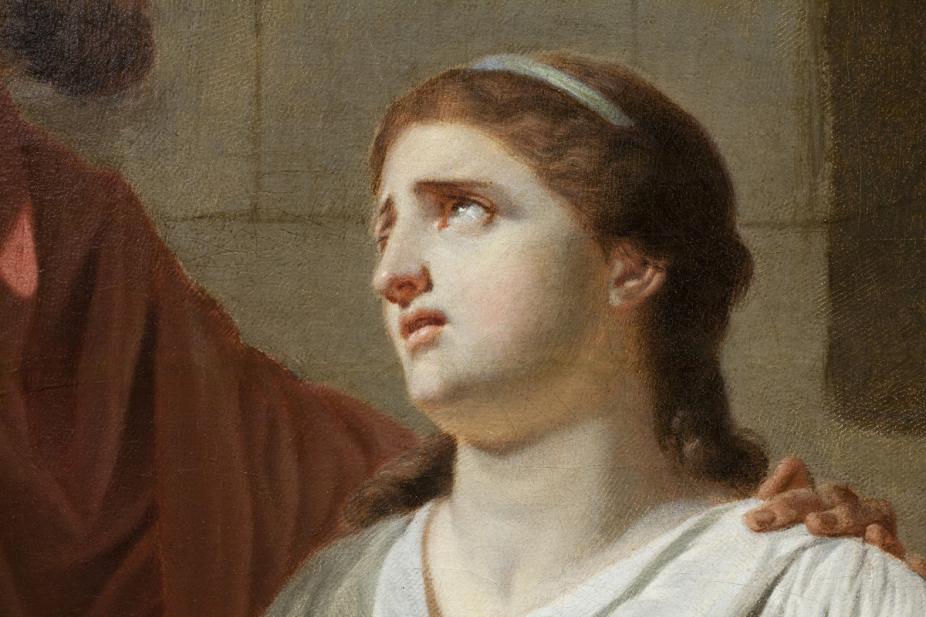 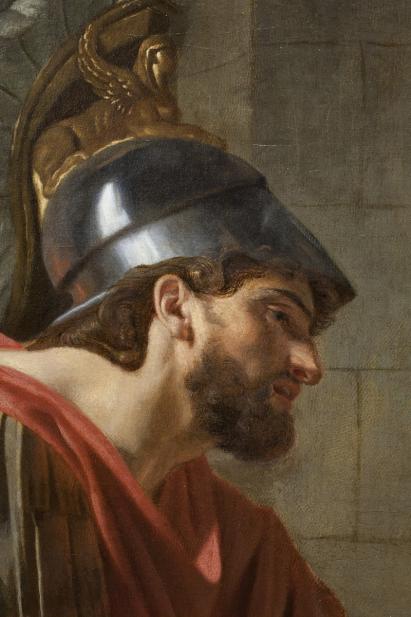 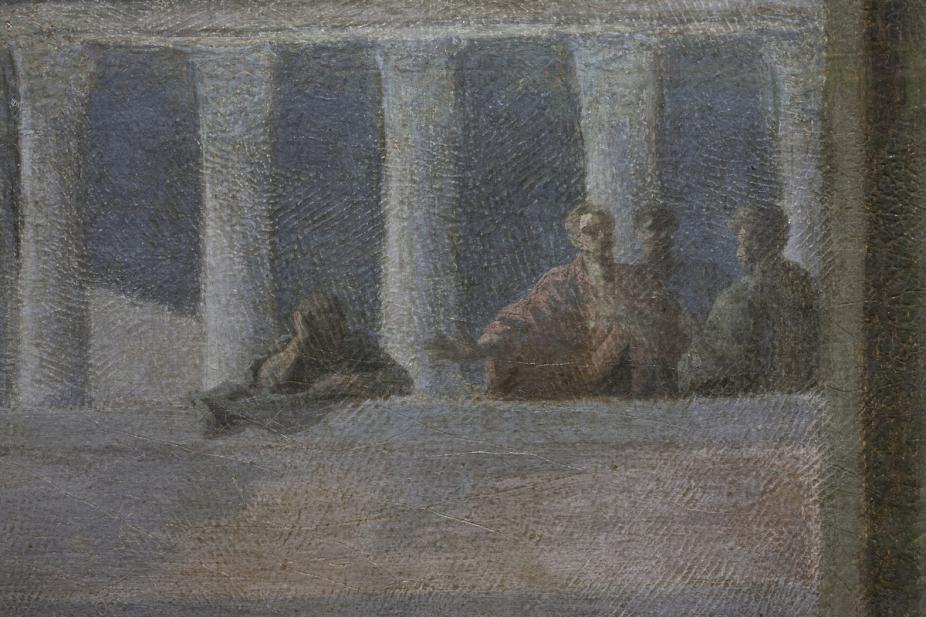 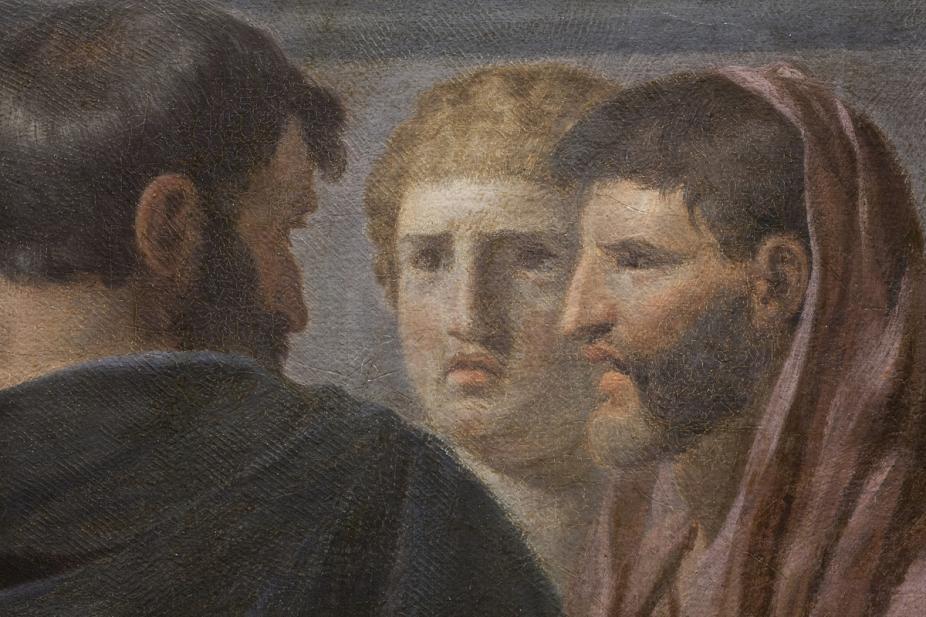 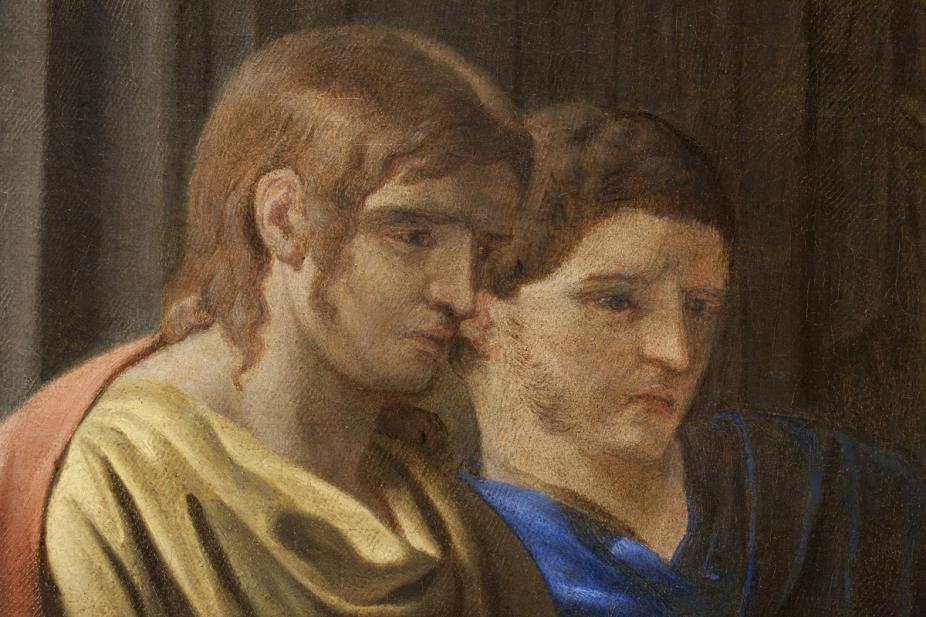 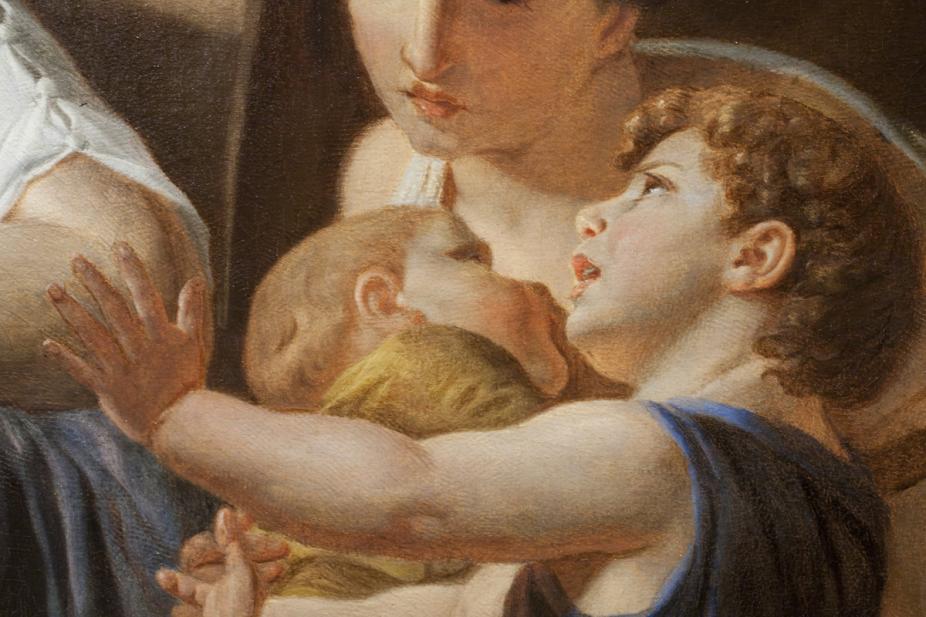 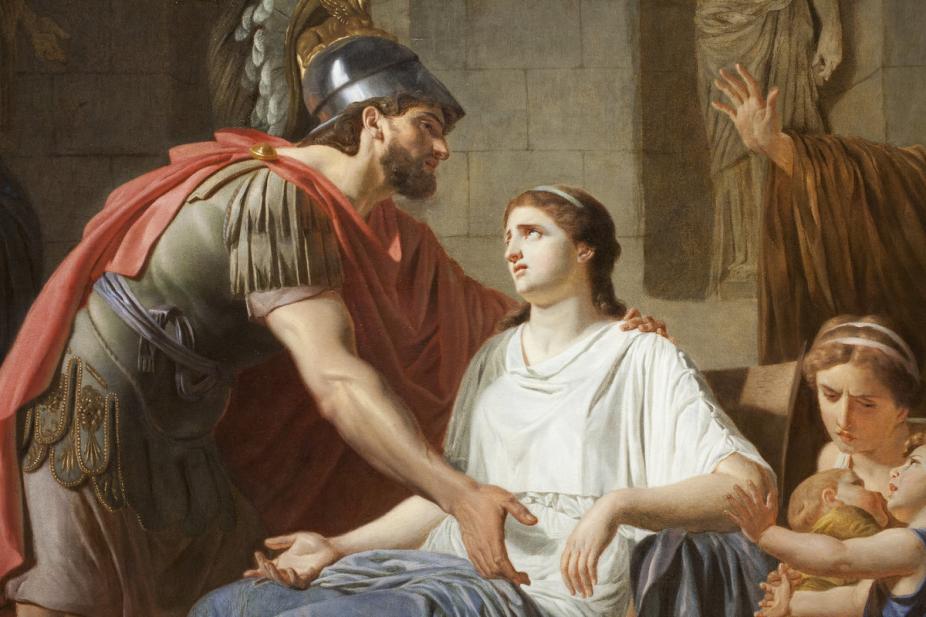 Etienne Aubry was born in Versailles, outside Paris, in 1745 and died there just 36 years later, his life cut short at a pivotal moment in his promising career. Coriolanus Taking Leave of His Wife was the last of his major paintings; it was exhibited at the Salon of 1781 just after his death. His teacher, Jacque Augustin de Silvestre (1719-1809) subsequently acquired the painting. The catalogue entry described the work as having a “well-constructed composition, beautiful color, and a fluid, painterly execution.”

As an artist, Etienne Aubry stands at the turning point between the decorative Rococo style and the more austere Neoclassical period, with its renewed interest in the art and literature of the ancient world. After Silvestre, Aubry went on to study with the history painter Joseph Marie Vien (1716-1809), a pioneer of Neoclassicism and later the teacher of Jacques-Louis David (1748-1825). At 26, Aubry was admitted to the Royal Academy as a portraitist, although he established his reputation as a painter of genre scenes that recall the earlier stylistic tradition.

Aubry’s most important patron, the prominent connoisseur Comte d’Angiviller, urged him to follow his dream of becoming a history painter. With the Count’s backing, Aubry travelled in 1777 to Rome—the epicenter of the classical revival—where he spent three years in that incomparably rich atmosphere. The recent excavations at Pompeii and Herculaneum were the talk of the town; innovative critical theories about classical aesthetics circulated; and a new awareness emerged of the heroic themes, noble grandeur, and calm simplicity of ancient art.

Upon his return to Versailles, Aubry executed what was to be his final history painting. For his subject he chose the story of the 5th century BCE general Gaius Marcius Coriolanus, in which the proud general is banished from Rome for his contemptuous treatment of the plebeians during a grain shortage. Vengeful, he defects to Rome’s enemies, the Volscians, and prepares to lay siege to his home city despite his family’s entreaties. In a desperate move, his wife Volumnia and his mother travel to the military camp to plead with him, and he relents, finally choosing family over politics. But it is too late—the Volscians kill him. This tale of military valor, political ambition, familial piety, and tragedy, first told by the ancient historians Livy and Plutarch, has endured in the later works of Shakespeare, Beethoven, Berthold Brecht, and others.

Aubry selected the moment when Coriolanus bids farewell to his family at home. The setting recalls spaces and sculptures the painter would have seen in Rome, and the small slice of landscape includes buildings based on well-known ancient monuments. His wife, Volumnia, sits resignedly in a chair, while his mother’s dramatic gesture foretells the tragic ending. Like many of his contemporaries, Aubry was nurtured by the theories and writings of Charles Le Brun, the most influential painter in 17th-century France. It was Le Brun who codified the methods and standards of painting, including the ways in which the “passions of the soul” were translated into facial expressions. Aubry clearly adopted Le Brun’s formulaic depiction of Sadness in Volumnia’s face.

Had Aubry lived longer, he would have seen the development of history painting in the service of French revolutionary politics. Only three years later, David painted his ground-breaking Oath of the Horatii.