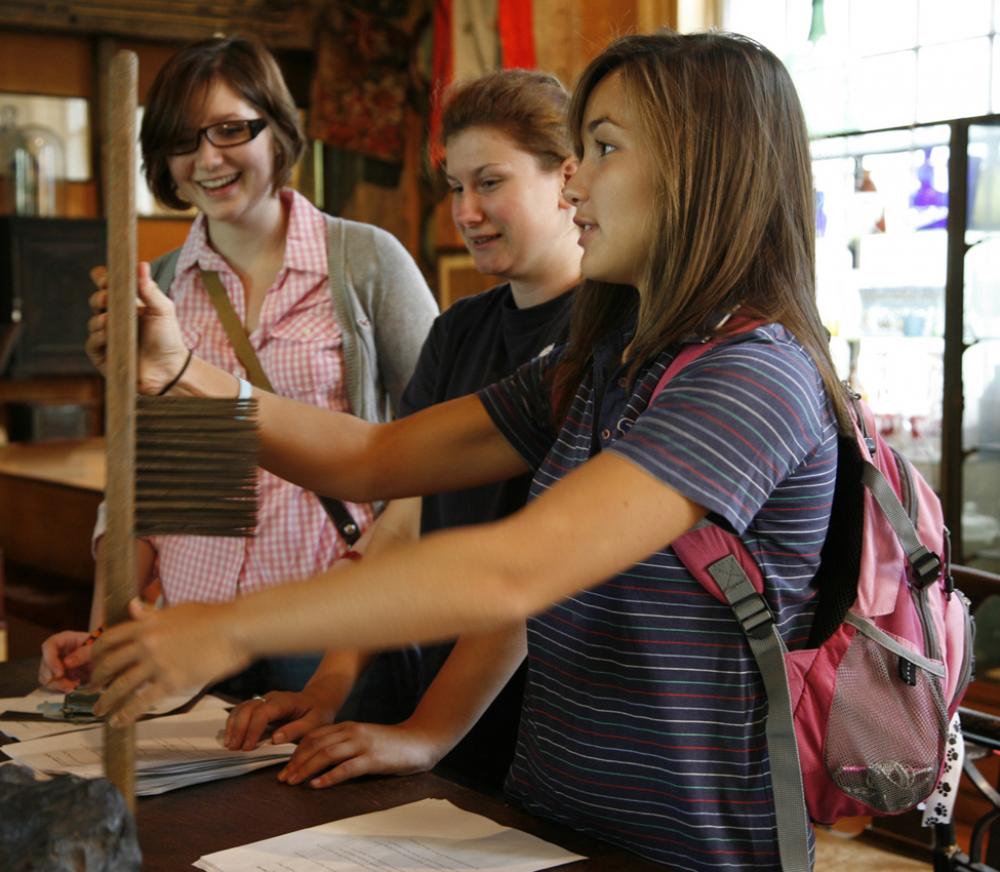 It's not surprising to find art students studying in a museum--but students of biology or politics?

On any given day, visitors to the Mount Holyoke College Art Museum might encounter a class in international relations, Italian, or religion. With some 20,000 objects dating from antiquity to modern times in its permanent and Skinner Museum collections, the museum has long been a multi-disciplinary resource for students in all subjects. Now the museum has the means to expand that role, thanks to a newly-received $500,000 grant from the Museums and Art Conservation program of the Andrew W. Mellon Foundation. The award, which will be used over a period of three and one-half years, will support initiatives to strengthen the academic role of the museum's collections and programs, primarily through the addition of two full-time staff positions.

"This Mellon Foundation grant will be transformative for the museum's efforts to serve faculty and students," said Marianne Doezema, the Florence Finch Abbott Director of the Mount Holyoke Museum.

The museum staff has worked with faculty members to enrich the curriculum for many years, and in 2007, after systematically studying course offerings, they launched a vigorous outreach effort, inviting professors individually to discuss ways in which they might use the museum as a “cultural laboratory” in their teaching. In the 2007-2008 academic year, 34 classes from 15 disciplines—from neurobiology and chemistry, to English and German studie—used more than 1,000 works of art as part of their courses during visits to the museum. While art students used the works of Diane Arbus and Andy Warhol to inform their studies, others related geometric designs to the mechanics of sight or surveyed historical ephemera to enhance their understanding of culture.

"The results were remarkable. Faculty initiatives to use the collections and special exhibitions doubled in direct response to this effort," said Doezema. "We've made extraordinary progress in the past year, and the demand is clearly growing, but we need additional staff if we are to realize the museum’s potential impact on the academic curriculum."

To that end, the grant will support the hiring of a coordinator of academic programs and a curatorial assistant, as well as a series of faculty seminars, student internships, and student workshops designed to enhance observational skills.

"Thinking creatively about how we could work specifically with individual professors on their particular courses has been key," said museum curator Wendy Watson. "We needed to tailor the links between their subject matter and syllabi to works of art in the collection, both here at the art museum and at the Skinner Museum. With the support of the Mellon Foundation, we will now be able to expand these efforts."

Associate professor of art history Anthony W. Lee is among the faculty who have regularly used the museum resources in their classes. Lee finds there has been "a visual turn in
academic thinking, where the study of visual culture is no longer the sole province of art historians."

"Under a younger generation of scholars, this is slowly being taken up by anthropologists, historians, sociologists, and even literary scholars," he said. "At Mount Holyoke even
biologists and political scientists are self-consciously turning visual." Professor of biological sciences Susan R. Barry has used museum resources in teaching her
Neurobiology of Art and Music course.

"Over the last decade, neurobiologists have grown increasingly interested in the connection between the brain and our ability to draw, sculpt, and sing," she said. "How does the
organization of the visual system, for example, influence the way an artist paints? The presence of the real items engages the students in a way that a Powerpoint display never
could."

The Andrew W. Mellon Foundation initiated the College and University Art Museum Program (CUAM) in the early 1990s after realizing that many campus museums were less
involved with the academic programs of their parent institutions than they might be. The objectives of the program are to discover and institutionalize effective ways for museumsand academic departments to collaborate fruitfully, and to strengthen the educational role of the museum and its collections in the teaching and training of undergraduate and graduate students.

The Mount Holyoke College Art Museum is open to the public Tuesday through Friday, 11 a.m. to 5 p.m., and Saturday and Sunday, 1 to 5 p.m. Admission is free, and the museum is fully accessible. For more information, visit www.mtholyoke.edu/go/artmuseum or call 413-538-2245.

Images are available upon request.