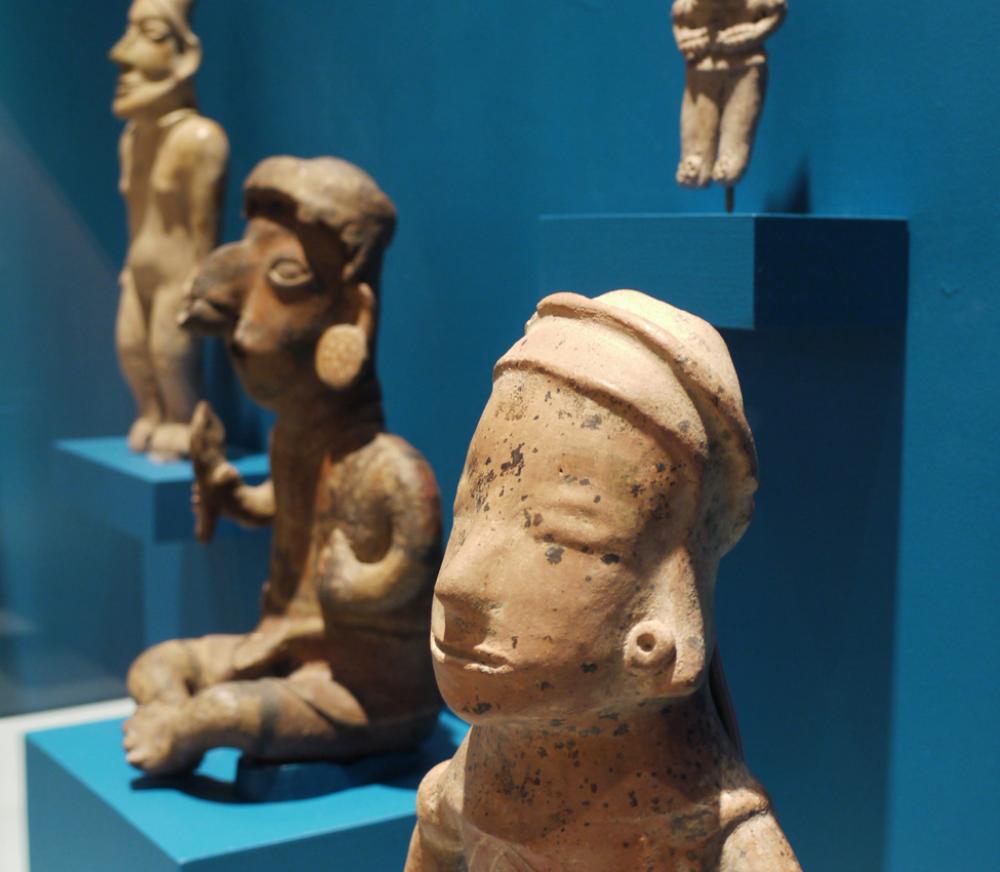 Four innovative exhibitions dominate the new season at the Mount Holyoke College Art Museum (MHCAM). Featuring works in three galleries ranging from contemporary sculpture and relief artists, to Ancient Mesoamerican ceramics in a fourth, the exhibitions present an unique opportunity for viewers to see some of the works in the collection that are either newly acquired or rarely on view.

Celebrating its recent acquisition of the complete 15-image suite of prints, MHCAM is pleased to present:

Kara Walker: Harper’s Pictorial History of the Civil War (Annotated): August 31–December 23, 2012
Throughout her career, Kara Walker has combined exquisite technique with biting social commentary. Her large-scale print suite Harper’s Pictorial History of the Civil War (Annotated) is considered by many to be her quintessential work in a multiple format and among the most important works in her oeuvre to date. In it she juxtaposes Harper’s version of the American Civil War with images of her own that question the notion that slavery ended with the war. Her works insist that we reconsider the semi-official narrative and the true plight of both African Americans and women during the war and beyond—an insistence that asserts the continuing centrality of race in our nation.

Beautifully drawn, and printed with rare skill, Walker’s prints vacillate between sumptuousness and fury. Images originally published as wood engravings are enlarged through lithography and become backdrops for Walker’s signature silhouettes executed in silk screen. The portfolio was printed at the renowned LeRoy Neiman Center for Print Studies in New York.

First published by Alfred H. Guernsey and Henry Mills Alden in 1866 after the war had ended, the original two-volume anthology, Harper’s Pictorial History of the Civil War, is a collection of images and essays intended by the editors to illustrate the history of the great conflict.

Walker's education includes an MFA from the Rhode Island School of Design in Painting/Printmaking, and a BFA in Painting/Printmaking at the Atlanta College of Art. When she received the MacArthur Award in 1997 (three years after completing her MFA) she was one of the youngest recipients to date. She represented the United States at the Bienal de São Paulo in 2002 and has had numerous one-person exhibitions including a full
survey at the Walker Art Center in 2007.

Under the direction of founder and master printer Professor Curlee Raven Holton, the Experimental Printmaking Institute has become known for its dynamic and collaborative approach allowing artists, students, and printers from diverse backgrounds to experiment with traditional printmaking techniques and to create new bodies of work. Holton established EPI in 1996 “as a way to create a living classroom that embraces diversity, creativity, and collaboration.” Over the years, the Institute has generated works of art that have been showcased internationally in traveling exhibitions and now figure prominently in collections worldwide.

These important works were generously donated to the Museum in 2007-2008 by Janet Hickey Tague ’66, former Mount Holyoke College Trustee and long-time EPI supporter, thereby establishing the Tague Collection of Prints by African American Artists. This gift of 17 prints significantly enhanced the Museum’s holdings in this area and was an important step in Mount Holyoke’s efforts to acquire key works by artists of color.

Against the Wall: Contemporary Art from the Collection
Opening August 1, 2012

The contemporary relief sculptures brought together in this exhibition are of many descriptions. Though relief is probably not the first form that
comes to mind when thinking of contemporary art, it is actually quite prevalent. The challenges of directly engaging the vertical plane of the wall
provide artists unique creative opportunities. Against the Wall explores some of the myriad ways artists have addressed the wall in furthering their
ideas in three dimensions.

The sculptures are organized into four groups, though most could fit into multiple categories. Christopher Wilmarth, Bruce Robbins, and Loren Madsen work in dialogue with
the vocabulary of architecture; Abe Ajay, Joseph Cornell, and Mary Ann Unger embrace a variety of abstract forms from geometric to organic; Kiki Smith and John Ahearn sculpt forms that directly evoke bodies; and Larry Rivers and Stuart Diamond create paintings that seem to have exploded out of their two-dimensional origins to become relief sculpture.

The selection is made primarily from the permanent collection with a few key loans to flesh out the range of approaches on display. It marks the beginning of our multi-year salute to the Museum’s permanent collection in honor of the Mount Holyoke College Art Museum’s 135th anniversary in 2011.

Encounters: Faces of the Ancient Americas
Opening August 1, 2012
To 16th-century European observers, artifacts of indigenous Mesoamerican and South American peoples possessed a scintillating foreignness that was simultaneously alluring and frightening. The perceived primitiveness of these objects persisted for centuries, with the first exhibitions of Ancient American art not appearing in the United States until the 1930s and ‘40s. Encounters: Faces of the Ancient Americas features 27 works of art drawn from the Museum’s sizeable holdings. Disentangled from lingering biases and misconceptions, these objects represent the sophistication and technological achievements of cultures that flourished from the 5th century BCE until European contact after 1492.

The ceramics on view are dominated by faces—images of people from the West Mexican grasslands, the Yucatán Peninsula, and the arid coastal plains along the base of the Andes—constructing a sense of their unique cultural identities. Each face represents a member of an individual society with independent religious systems and civic structures, ranging from the extensive cities of the Maya to the small chiefdoms of the Nasca. Although distinctive and diverse, the ceramics of these cultures also reveal a similar reliance on the land and a devotion to preserving the human form in clay. Examining images of men and women, shamans and deities, and flora and fauna, Encounters offers a window into the lives and beliefs of the ancient Americas, while highlighting some rarely exhibited works of art in the MHCAM collection.