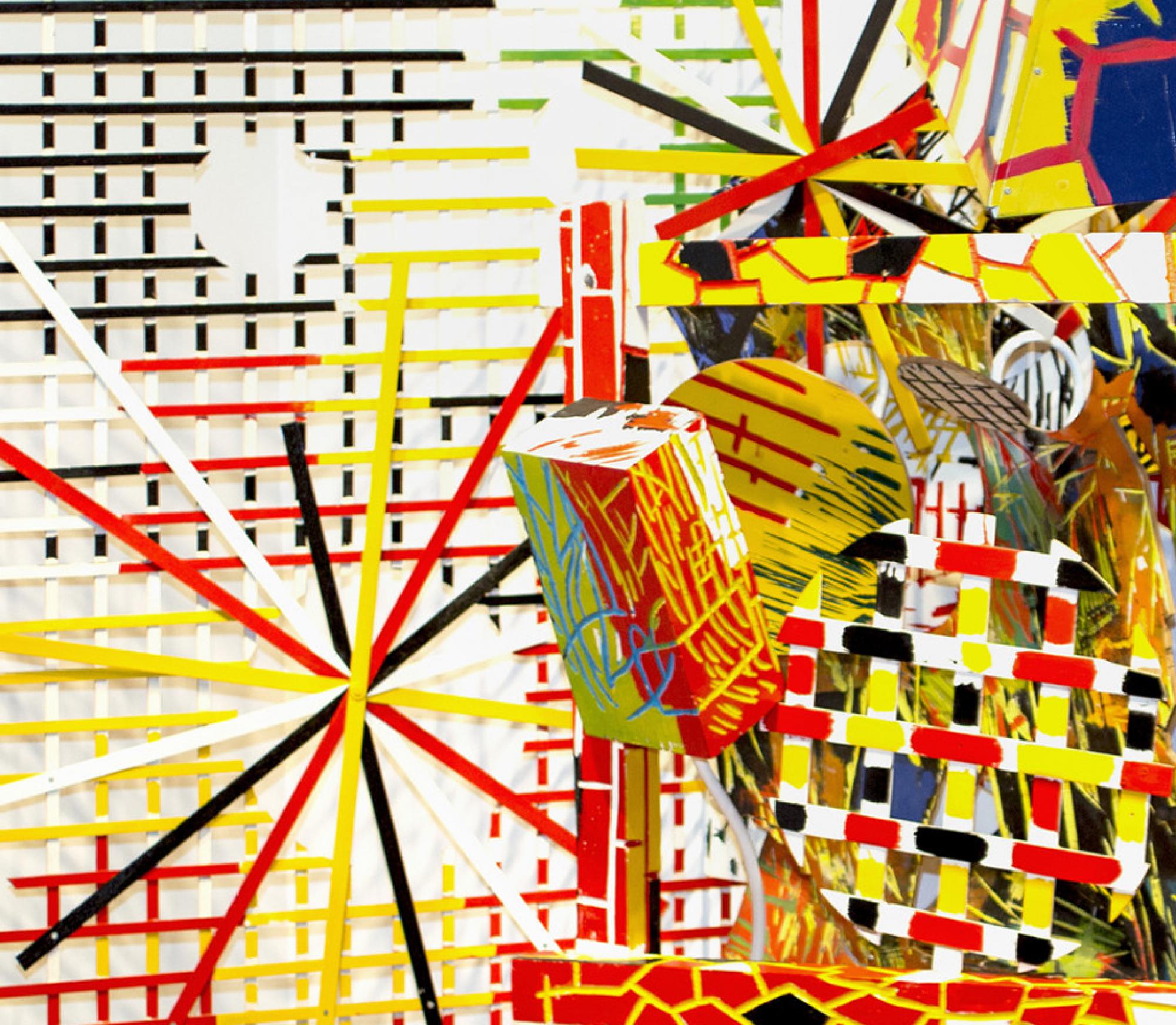 This fall, the Mount Holyoke College Art Museum will host two exhibitions of contemporary art and a series of talks by curators and renowned artists Judy Pfaff and Mel Bochner.

Judy Pfaff's art can stop viewers in their tracks. Her installations fill entire galleries with vibrant, colorful forms that exude excitement and invite viewers to immerse themselves in her fantasy world.

Pfaff was a pioneer of installation art, and the Mount Holyoke exhibition spotlights a particularly experimental period in Pfaff's long and distinguished career.

From 1985 to 1992, she merged earlier interests in sculpture and installations into a bold hybrid. The installations are neither flat images hung on gallery walls nor traditional sculptures in the round, but something "betwixt" the two.

"Her work literally comes off the wall," says the museum's assistant curator, Hannah Blunt. "It bridges two- and three-dimensional forms in a way that they seem to burst forth from the wall yet retain their relationship to it."

The results are captivating, cyclonic compositions around which the viewer must move continually to take in all of the visual elements and their shifting correlations.

The exhibition was sparked by a 2014 gift from Astrid Rehl Baumgardner, a 1973 alumna of Mount Holyoke. Wallabout embodies the exuberance of Pfaff's work at the beginning of the period examined by the exhibition, said John Stomberg, the museum's director and curator of the exhibition.

"We witness in the prints and the reliefs an explosive array of forms and colors, shapes and lines, solids and voids," said Stomberg. "And despite the pervasive vitality of these compositions, they are always harmonious overall."

Artist Judy Pfaff will deliver the Sixth Annual Louise R. Weiser Lecture in Creativity, Innovation, and Leadership through Art, "From the Beginning," at 5:30 p.m. Thursday, September 24, in the Mount Holyoke Art Building's Gamble Auditorium, followed by the Museum's fall opening reception. Director John Stomberg will give an Art à La Carte Gallery Talk about the exhibition, 12:20 p.m., Thursday, November 19, in the Museum.

Some art is immediately understandable, but this exhibition of Mel Bochner's art asks viewers to ponder and puzzle out its meaning.

The centerpiece is a set of prints Bochner created to illustrate a volume of twentieth-century philosopher Ludwig Wittgenstein's thoughts, On Certainty. Each piece shows sequences of red and black numerals arranged along blue grid lines that divide the print into sections.

Mount Holyoke Professor of Philosophy Thomas E. Wartenberg, who curated the exhibition, acknowledges that the works can seem hard to understand at first.

"Wittgenstein is a very difficult philosopher who writes in a style very much like Bochner's art," said Wartenberg. "In both, you have to puzzle your way to understanding."

Art Museum Assistant Curator Hannah Blunt said that Bochner is interested in "making thoughts visible." And although the connection between Wittgenstein's On Certainty and Bochner's illustrations for it might not be immediately apparent, Wartenberg's analysis revealed parallels.

The background grid of each piece represents what we know with certainty—unchanging rules—while divergences in the number sequences represent decisions made in a context of uncertainty—what we doubt we know for certain. It's a visual way of representing Wittgenstein's attempt to disprove philosophical skeptics, who believed that everything we take for granted might be wrong.

The exhibition, then, rewards viewers willing to think their way through ambiguous images to reach satisfying intellectual conclusions. As Blunt puts it, "Bochner's art is very simple yet very complex—just like philosophy."

The Museum will publish a catalogue of the exhibition in November 2015.

The Mount Holyoke College Art Museum is free, open to the public, and fully accessible.