Six-fold screen with scenes from Tale of Genji 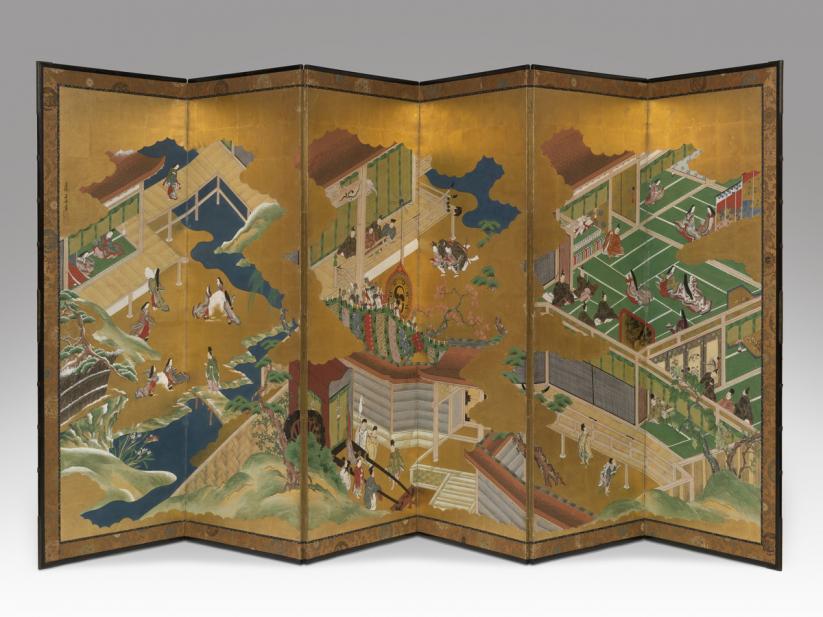 These colorfully painted and gilded screens illustrate The Tale of Genji, a novel written by Lady Murasaki in the early 11th century. They likely formed part of a bridal trousseau for the daughter of a very wealthy family. During the Edo period screens like this one were popular dowry items. They would be just one item in a trousseau that usually included as many as 400 objects as diverse as lacquered cosmetic boxes, paintings, musical instruments, furniture, books, and kimonos.

The Tale of Genji focuses on the romantic exploits and familial life of a prince in the Heian period (794–1185). The scenes illustrated on the screens are not in chronological order, but rather are organized by season.

The right screen depicts spring, seen clearly in the blooming cherry blossoms. An ancient Japanese ball game called kemari is about to be played at Genji’s palace. One of the players catches a glimpse of Genji’s beautiful and young new wife when the curtain protecting her from view is accidentally pulled aside by a cat. This chance encounter would turn into a long love affair between the kemari player and Genji’s wife.