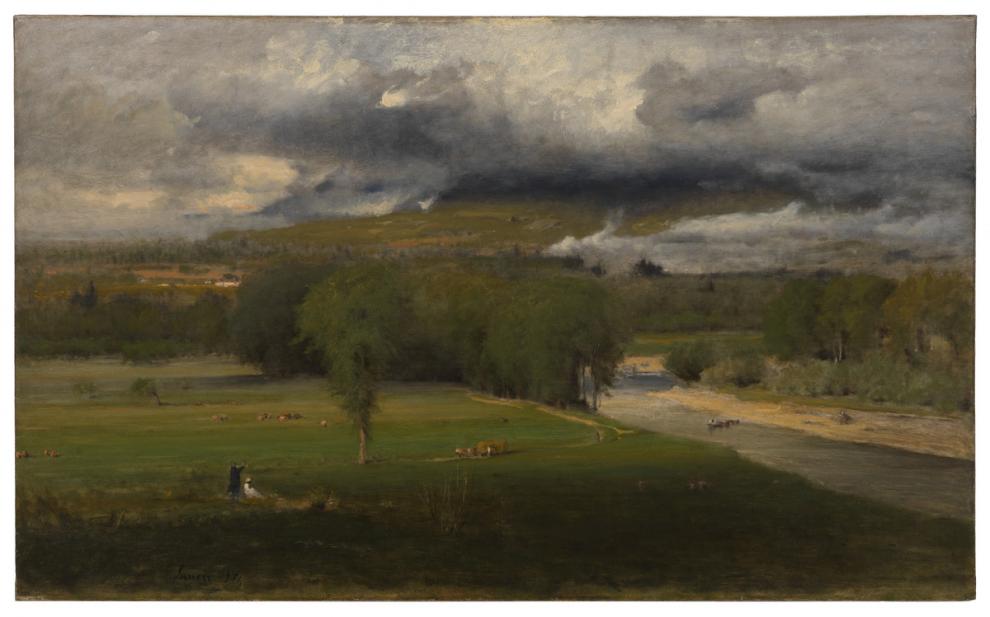 This impressive painting of Conway Meadows was executed in Inness’s Boston studio after the artist spent the summer in North Conway, New Hampshire. The scene represented was a favorite of artists who summered in the Conway area; the famous American landscape painter Albert Bierstadt also painted this view across the Saco River to Moat Mountain and the Ledges. However, Inness’s rendering of the popular scene differs dramatically from other artists’ in his surprising decision to omit the White Mountains. The dramatic peaks were the focal point of most other contemporary depictions, but are hidden in Inness’s painting by ominous gray clouds. He instead emphasizes atmospheric effects, using soft brushstrokes and washes of color to describe the mood created by a passing summer storm.

Saco Ford: Conway Meadows reflects George Inness’ experiences during the summer of 1875, when he spent four months at the Kearsarge House in North Conway, New Hampshire, and used the second story of an abandoned schoolhouse as a studio. Inness created three oil paintings of this particular view, with dark clouds obscuring the summit of Moat Mountain and patches of sunlight highlighting the banks of the Saco River at its shallow ford. The large size of the MHCAM version, which was painted in recollection of the view after the artist had returned to Boston, testifies to Inness’ attachment to the particular scene.

In the late nineteenth century, North Conway was a popular haunt for artists seeking quintessential New England landscapes. Inness was probably drawn to the locale because of its spiritual similarity to the Barbizon region of France, which he had recently visited. North Conway, like the Forest of Fontainebleau and the plains of Barbizon, was an idyllic retreat for those jaded by the growing industrialism of urban areas. There is a striking similarity between the visual stimulation embodied in Inness’ painting and the description of the vista in a contemporary guide book:

A ramble by the banks of the Saco in North Conway…will often yield what we may soberly call rapture of vision. A great many persons, in looking around from Artist’s Hill, would say at first that the green and blue and white and gray, in the foliage, the grass, the sky, the clouds, and the mountains, were the only colors to be noticed, and these in wide, severely contrasted masses. We should go entirely beyond their appreciation in speaking of the…more subtle hues on the darker level sward, the glimmer of pearly radiance upon pools of aerial sapphire brought from the distant mountains in the wandering Saco…the shadow of a wandering cloud thrown over all its variety of form…Ah, how the light breaking through the shifting openings brings out a continual succession of scenic effects! (Thomas Starr King, The White Hills: Their Legends, Landscapes, and Poetry,” Boston: Crosby, Nichols, and Company, 1860, pp. 179-81).

Inness did not execute Saco Ford with the same fidelity to detail as other artists who painted in North Conway. Instead, the work depicts a familiar landscape in a new way. One result of Inness’ time in Barbizon was the modification of his earlier, academic manner for looser, thinner applications of oil consistent with avant-garde French landscape painting. While not as moody and mystical as his works from the late 1880s and early 1890s, Saco Ford reveals Inness’ expressive use of color and form.