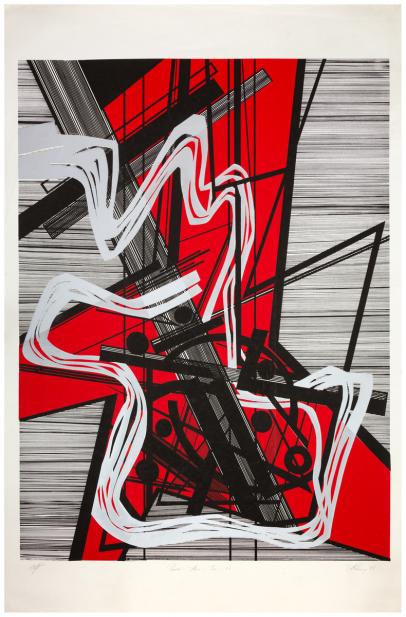 From the exhibition, Faculty Acquisitions, February 26, 2021 - May 29, 2022
Mavis Iona Pusey was a pioneering abstract painter and printmaker working in the mid-to-late 20th century, whose work struggled to gain traction and recognition throughout most of her career. Pusey, along with other Black abstract artists, was often rejected outright for her stylistic choices in a moment when figurative and political themes dominated the cultural and artistic landscape. Despite these challenges, Pusey experienced some level of success in the New York art world, whose affinity for abstraction occasionally afforded opportunities to women, Black artists, and artists of color.

Recognized as one of Pusey’s most noteworthy prints, Paris: Mai-Juin is an abstract celebration of the artist’s hard-edge style, observable in the work’s bold geographic forms in black, gray, and red. Pusey has described her work as being inspired by “the energy and the beat” of a particular place. Paris-Mai-Juin was completed while Pusy was living in Paris, France in the midst of the student and worker uprisings that took place there in the 1960s.