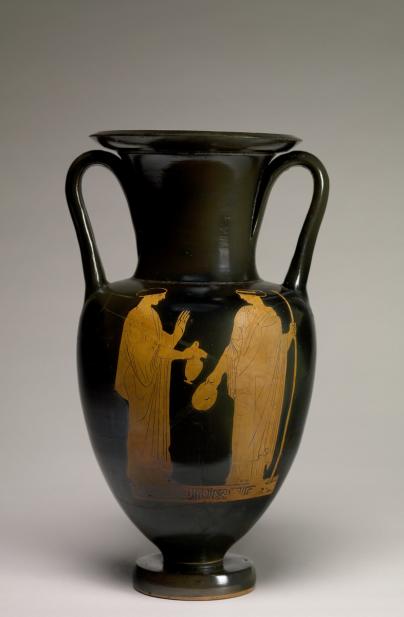 The vase painter Polygnotos signed five vases, and on the basis of similarity to these, some sixty-five others including the Mount Holyoke amphora have been attributed to him. Polygnotos was probably named after Polygnotos of Thasos, the famous mural painter of the Early Classical period whose paintings in Athens and Delphi are described by the ancient traveler Pausanias and are thought to be reflected in vases by the Niobid Painter dating from shortly before the mid-fifth century B.C.

Polygnotos came out of the workshop of the Niobid Painter, but his style quickly developed away from the severity and archaic angularity of his teacher’s work toward softer, fleshier figures and a more fluid line. Like other vase painters working in Athens in the third quarter of the fifth century B.C., Polygnotos embraced the new styles created by Pheidias for the Parthenon sculptures. Drawn with a sure flowing hand and a minimum of decorative detail, the figures on the Mount Holyoke vase have a calm stateliness which clearly reflects the quiet nobility of the figures on the Parthenon frieze.

Details uncovered in the recent cleaning of this amphora have helped to identify the figures as participants in a religious ritual, probably a sacrifice. Although the ceremony itself is not shown, the wreath, crowns, and libation vessels represented on the vase are those commonly associated with sacrificial scenes.