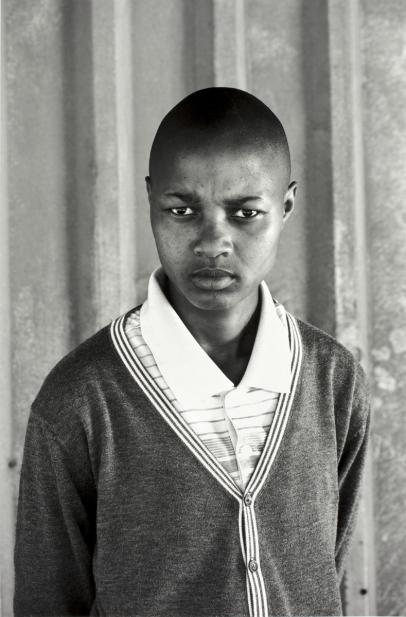 The South African photographer Zanele Muholi refuses to call the people in her portraits “subjects” and prefers “participants.” Her work explores gender, sexuality and the intersection of the two and focuses on the black LGBTI community of South Africa, specifically lesbians who are often her own friends and acquaintances. In her ongoing series Faces and Phases, Muholi’s goal is to create positive visual representations of that community.

In Muholi’s portrait of Lumka Stemela, a black South African lesbian, her participant is frontally posed from the chest up with her face as the main focus. The bright white of her shirt’s collar draws the viewer to her commanding eyes. Lumka’s powerful gaze confronts and challenges the viewer.

Post-apartheid South Africa established some of the earliest laws banning discrimination based on sexual orientation. In 2006, it became the first and only African nation to legalize same sex marriage. Despite these legislative and political achievements, there is still intense and prevalent homophobia in South African society. Currently, there is no anti hate-crime legislation in the country despite the assaults, “corrective rapes” and murders that are regularly directed at gays and lesbians. Muholi considers her work to be part of a new “visual archive” aimed at disrupting the established narrative of erasure and invisibility of black LGBTI people in her country.

Through her photographic portraits, Muholi’s participants claim their humanity in the face of extreme violence and oppression.