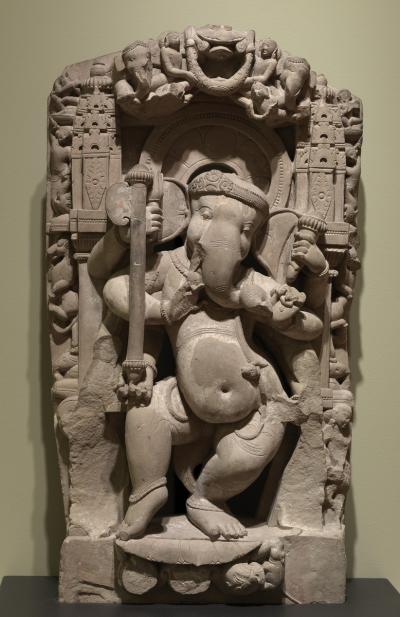 He has the face of an elephant; he holds an axe, a lotus, and other objects in his many arms; he has a potbelly and the legs of a child. At first glance, an odd conglomeration of features. Yet the figure of this dancing Ganesha exudes sensuous grace and dignity. The sculptor who fashioned this image, the patron who commissioned it, and the worshippers who viewed it in its temple niche were united by the Hindu culture of devotion (bhakti), expressed in the ritual worship (puja) of images of gods and goddesses. Darshana, viewing the god’s image, is itself an act of devotion, a connection that elicits the deity’s beneficence and grace.
Every feature of the Ganesha icon tells a story about his nature, powers, and deeds. The potbelly signals his love of sweets, and he rides on a mouse (shown at the bottom of this stele). Yet he is the god of wisdom, and his curved trunk embodies “Aum,” the sound-symbol of the cosmos. Ganesha is the “God of Beginnings” and “Remover of Obstacles.” His blessing of success must be sought before any new undertaking—a journey, the first day of school, a concert. Not surprisingly, he is the most popular of Hindu gods.

This sandstone stele originally formed part of the exterior
decoration of a Hindu temple where it would have been
seen by worshippers making ritual circumambulations or
walks around the building. It depicts the popular deity
Ganesha, son of the goddess Parvati. Here the elephant-
headed god dances joyously in imitation of his father, Shiva, the king of dancers. It is traditional among Hindus to invoke Ganesha's blessings before the initiation of any new endeavor or when seeking to overcome obstacles in life; he is also the divinity associated with knowledge.

Ganesha's sensuous rounded forms and lively pose are
characteristic of Indian sculpture of this period in northern
and central India. The shrine-like niche in which he stands is topped by flying celestial figures and framed by ornamental architectural elements, female attendants, and composite animals or chimeras known as vyalas. Below the lotus on which Ganesha stands is a tiny mouse, his personal attribute or vahana. In some of his eight hands, the god holds other attributes: a lotus, a broken tusk, an ax, and a sweetmeat. His corpulent body is further adorned by a snakelike belt or naga, beaded jewelry, a headband, and the skin of a tiger, whose grinning face appears on his left thigh.