Angel (pinnacle from the Maestà altarpiece) 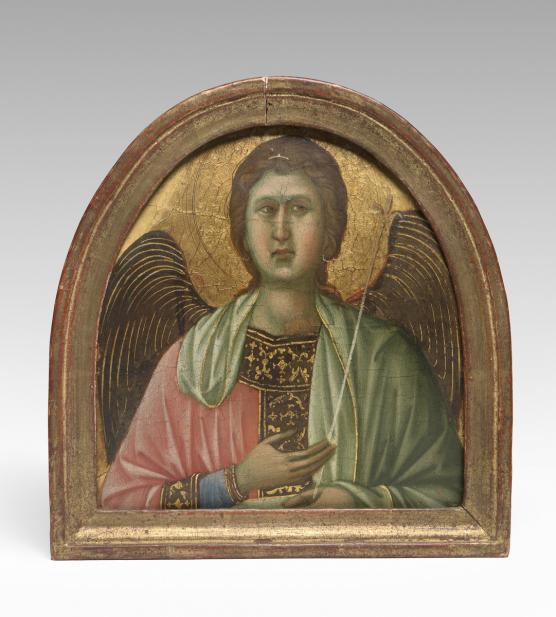 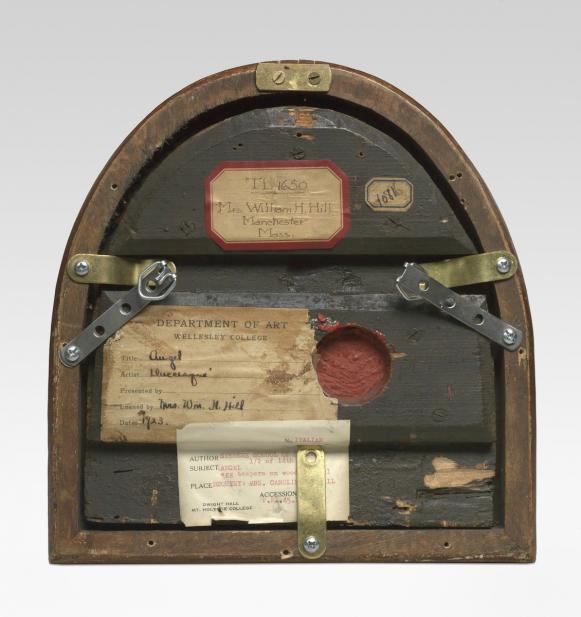 This small panel painting once adorned the top of the sumptuous Maestà altarpiece—one of the great masterpieces of late medieval Italy. It’s painter—Duccio di Buoninsegna—is widely considered to be among the most important figures in Italian art, and only a handful of his works are in American museums. Painting at a crucial moment during the dwindling of the medieval period but before the birth of the Renaissance, Duccio's art fused a new naturalism with the formality and decorative richness of earlier styles—a combination apparent even in this small painting. The angel's position at the top of the altarpiece reflects its role as a representative of the divine and illustrates its place in the hierarchy of heavenly hosts, above the saints and martyrs. Duccio worked with a large workshop of painters and artisans who all played a part in the creation of the enormous (7 ft × 13 ft) altarpiece. MHCAM’s angel panel, however, has been attributed to Duccio’s own hand, making it all the more significant. Of the original twelve panels depicting angels, the whereabouts of only four are known today.

Duccio’s Maèsta altarpiece (c.1310) for the Cathedral of Siena was an innovative masterpiece that profoundly impacted Italian art well into the 15th century. Originally a complex polyptych of monumental proportions, it was dismantled in the 18th century and fragments are now housed in museums all over the world. While it is believed that 12 angel pinnacles originally adorned the altarpiece, Mount Holyoke’s is one of only 4 surviving today.

Three distinct styles of painting are present in the Maèsta, a phenomenon not unusual during an era characterized by revolutionary changes in art. Analyzing a small fragment is useful in describing the overall themes and stylistic trends that dominate the larger altarpiece. Byzantine influence is reflected in the gold striations on the angel’s wings that give them a flat, stiff appearance, and in the severe frontality of the figure. The gold background that dominates the altarpiece is likewise a remnant of the Byzantine tradition.
The Gothic style is present in the exquisite gold pattern of the angel’s tunic, reminiscent of the delicate bar tracery often used in stained glass windows of this period.

Despite the obvious influence of traditional methods of painting, Duccio was also looking forward to the future of Italian art. His rendering of the human form reveals his familiarity with Giotto’s work, characterized by naturalism, volumetric drapery, monumentality, and realistic proportions. Unlike figures in Gothic painting and architecture, the angel’s features are carefully modeled and three-dimensional. Duccio also adopted Giotto’s uncanny ability to balance colors either by means of symmetry or contrast, a technique clearly demonstrated in the multiple pastel hues of the angel’s robes.

Stylistic devices not only heightened the beauty and appeal of the altarpiece, but also contributed to its symbolic meaning. The strong frontality of the angel conveys an aura of celestial majesty, delineating the heavenly and earthly realms by setting him apart from the viewer. This juxtaposition of the earthbound and ethereal is further emphasized by the abundance of gold, delicately incised patterns, and soft jewel-like colors that surround the angel. The location of the pinnacle at the very top of the altarpiece reflects a heavenly hierarchy, with saints and martyrs placed below the angels.

Duccio’s altarpiece was innovative in its complex spatial structure, dramatic landscape and narratives, and naturalistically rendered figures, however he still retained past traditions and styles, reflecting the many transitions taking place in early Renaissance art.