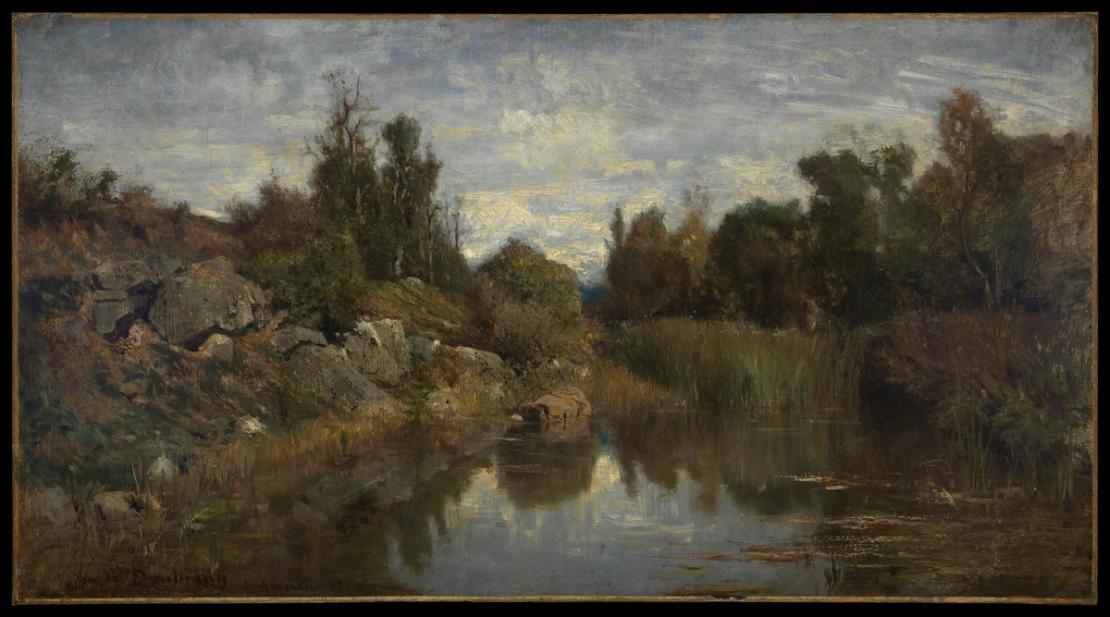 Charles-Francois Daubigny was one of the original members of the Barbizon group of painters who elevated landscape to a high form of artistic expression in the middle of the nineteenth century. Working directly from nature, Daubigny and his contemporaries endowed their depictions of the French countryside with a strength and grandeur that was substantially appreciated in the later part of the century.

Daubigny frequently painted in the section of France called the Isère where the village of Optevoz is located. His first exhibited painting of the region appears to have been at the Salon of 1850 and over the next decade he showed at least a dozen paintings devoted to aspects of its scenery. The Water’s Edge, Optevoz shares with other depictions a sensitivity to the region’s constantly changing light and exemplifies the basic principles of Barbizon naturalism. Direct and unidealized handling of space, light, and texture found in an ordinary corner of nature is achieved without tedious details or superficial virtuosity. It also elucidates Daubigny’s contribution to Impressionism. With its small, variously colored brushstrokes and relatively undistinguished subject, pictures such as this opened the eyes of the next generation of painters to the pictorial attractions of their immediate surroundings. While Daubigny made oil sketches as well as drawings outdoors at this period, there is little evidence that he completed large paintings such as this outside of the studio. Nevertheless, The Water’s Edge, Optevoz conveys the kind of immediacy that one would see in a work that had been painted en plein air.

According to the inscription, Daubigny gave the painting to his artist friend, Adolphe Appian, in 1856. Appian was also a landscape painter; in fact, he may have been the person who persuaded Daubigny of the pictorial charms of Isère. By 1852 the two men were working side by side there. Appian, who was an ardent admirer of Daubigny’s achievements, made his way primarily by creating lithographs and etchings of his own and others’ paintings. In 1855 he made a lithographic reproduction of one of Daubigny’s Optevoz canvases. Daubigny may have given Appian this painting in gratitude for his encouragement, companionship, and assistance in managing his affairs.