Skyphos with Herakles, Athena, and Hermes 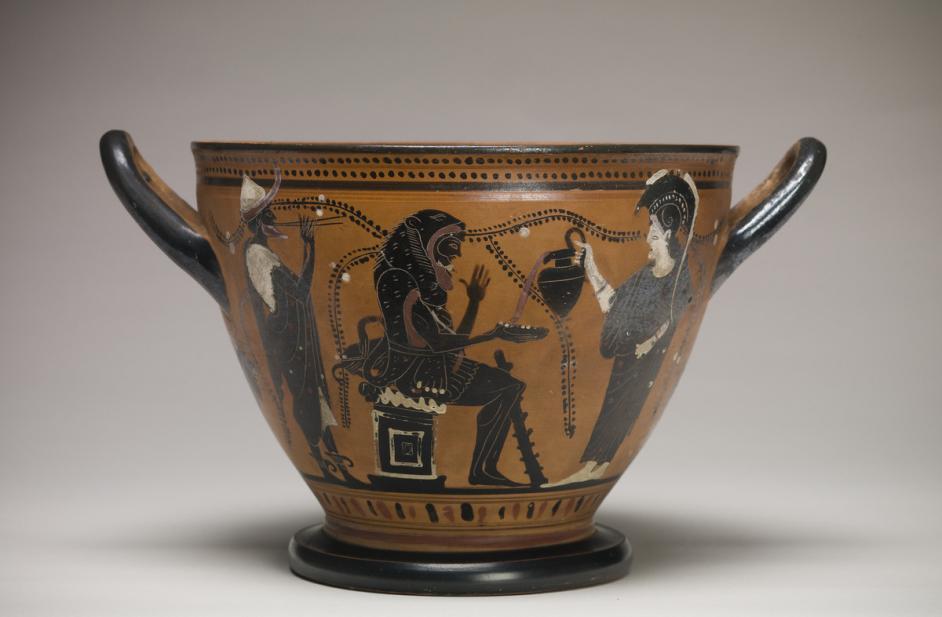 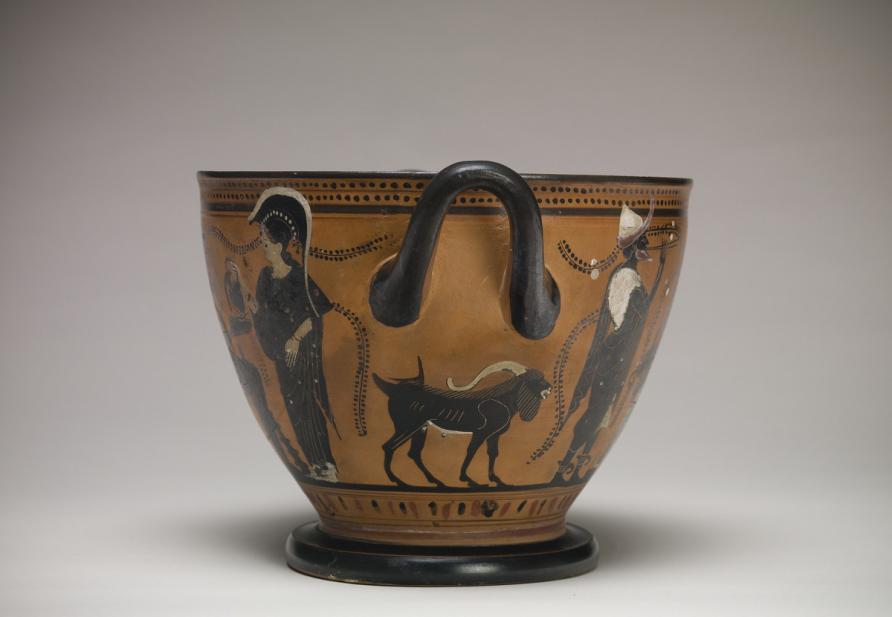 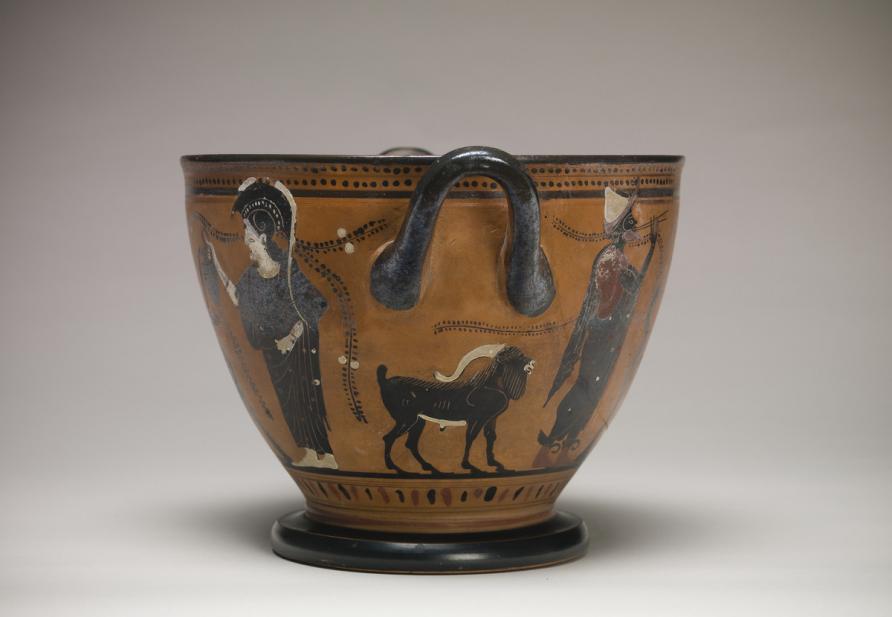 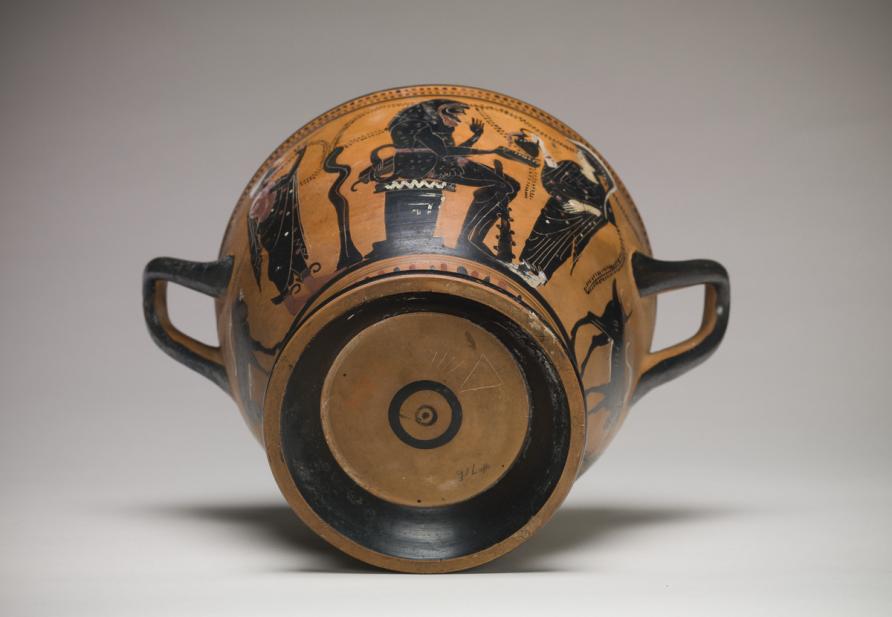 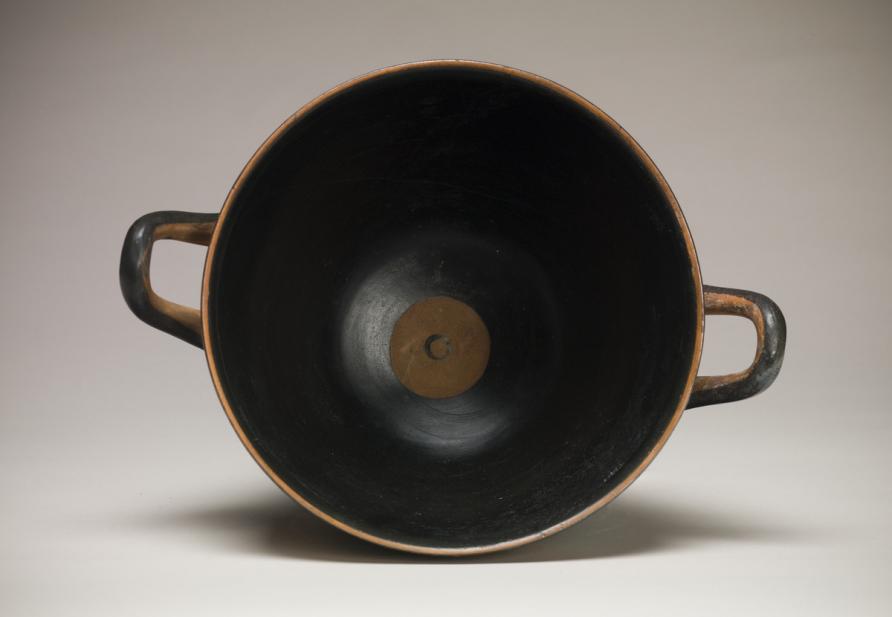 Herakles is a unique figure in Greek mythology, achieving divine status through his feats of not only strength, but also intellect. The son of Zeus through an affair with the mortal woman, Alkmene, Herakles was half divine by blood, but he was barred from a seat on Mount Olympos until his unfortunate death by poison. The hero is famous for the 12 labors that he completed as purification for his blood guilt; while struck by a fit of madness by Hera, Zeus’ jealous wife, Herakles killed his own wife and children in a horrific act of violence. Following the directives of the Oracle at Delphi, Herakles indentured himself to his cousin, Eurystheus, and completed 12 daring feats to cleanse his conscious.

Herakles appears on this skyphos, a broad-mouthed drinking vessel with two lateral handles, in a seated position flanked by the goddess Athena on the right and the god Hermes on the left. He sits on a rectangular seat with a cushion and balances his club of olive wood between his legs; his other attribute, his quiver and bow, are just visible behind his back. Athena’s white skin identifies her as the only woman in the scene, and her crested helmet is her unique attribute. On the left, Hermes stands wearing his winged boots and traveling hat of the messenger and also plays the double flute.

The presence of music, goats (under the handles), and the pouring of a libation from Athena’s oinochoe (wine jug) into Herakles phiale (shallow bowl used for offering wine or oil) all reflect a theme of ritual sacrifice. This particular Heraklean subject matter is unusual and does not appear to have any literary references. Athena regaling Herakles could perhaps be a moment of reverence that occurred in between two of his labors or at the culmination of his apotheosis at Mount Olympos, but the scene is rarely illustrated on Attic vases. In fact, the Theseus Painter, to whom this vase is attributed, is the primary painter of the topic, yet even he only created four other known vases with the unusual scene.

While the Theseus Painter is so named for the frequency in which he depicted images of the Greek hero, Theseus, this vessel dates to a period in Attic history when Herakles was the paramount champion of the city. He was a favorite of Athen’s patron goddess, Athena, who frequently appeared at the hero’s aid in depictions of his labors, such as in four of the metope reliefs on the temple of Zeus at Olympia: the scene of the Nemean Lion, the Stymphalian birds, the apples of the Hesperides, and the Augeian stables. Heraklean themes were pervasive in Athenian artwork, appearing on 44% of vases up to 510 BCE, especially on black-figure pots like this example. This skyphos provides a fine example of the optimism of the Athenian people during the late Archaic period as they approached a limited form of democracy and ended the rule of the tyrants. As a mortal hero, Herakles proved that man could be victorious against even the greatest challenge, using his agility of mind and body to confront his enemies.
- From Reconstructing Antiquity, Rachel G. Beaupré