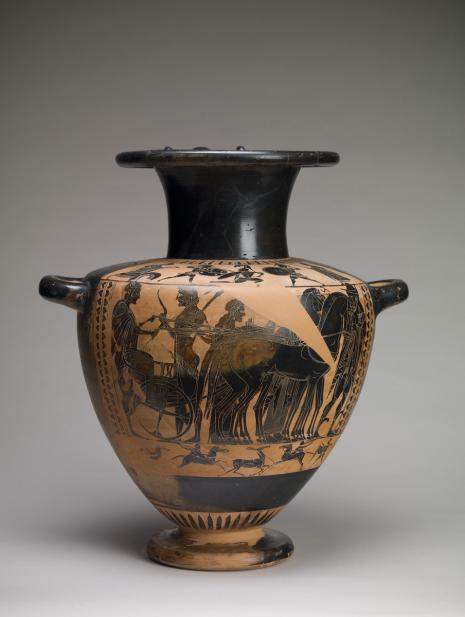 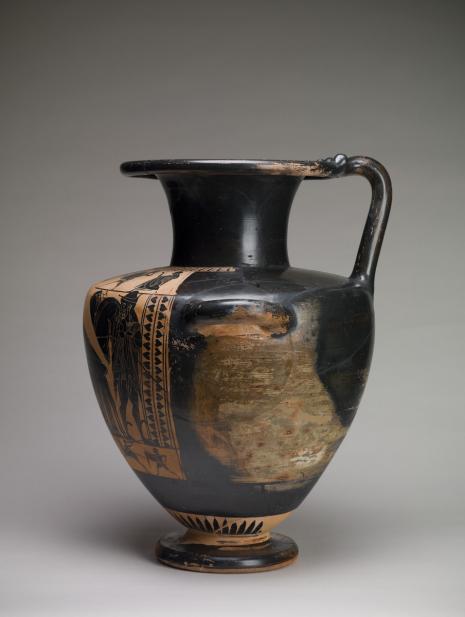 This black-figure vase was created during a transitional period in the history of Greek ceramics when many artists were experimenting with red-figure decoration. The Attic artist, the Eye-Siren Painter, demonstrates his adherence to tradition in this example as he enlivens the surface of the vase with finely incised lines (made with a pointed stylus) and depicts his narrative of human and animal figures in sintered slip which appears black on the red surface of the pot. In addition, the style of the vase also reflects common characteristics of the Archaic period (800-480 BCE), which was coming to a close: a lack of facial expression, inaccuracies of anatomy, stylized musculature, and a sense of emotion through movement.
The vase is a shoulder hydria, a type of vessel generally used by Greek women to fetch and store water, and its shape clearly caters to this function: a pair of small lateral handles project from the sides and a tall vertical handle attaches to the back for easy pouring. On this vase, the back handle is surmounted by three bulbous protrusions, likely mimicking in clay the rivets that would have been used to assemble a metal vessel. A few examples of bronze and silver vases have survived and now offer art historians with a tentative sense of the economic structure of Athenian decorative arts. It is likely that metalwares were the precious objects of the day and that ceramics were the vessels of the lower classes. In this example, the potter has
perhaps chosen to mimic the style of a higher status vessel as an attempt to align his craft with the prestige of metalwork.
The subject matter of this vase—the ascent of the hero Herakles to Mount Olympos—was extremely popular during the late sixth century BCE, with over 200 known vases depicting this scene. Herakles was a clear favorite of the goddess Athena, who is shown both in literature and in art as aiding the hero during his 12 labors. While Herakles was a focus of cult worship in a broad geographic region outside of the city, his special role in Athens seems to stem from his association with Athena, who was the city’s patron. The mid-sixth century BCE tyrant, Peisistratos, allegedly even used this allegiance as political leverage when he arrived on the Acropolis in 550 BCE in a chariot driven by a woman dressed as Athena, and himself posed as
the hero Herakles.
On this vase, Athena towers over her companions as she steps into a chariot drawn by four horses. Herakles stands facing her, depicted in profile as the heroic nude in a style that is reminiscent of archaic Greek male sculptures known as kouroi. He holds in his hands two of his attributes, his olive wood club and his bow, identifying him as both a warrior and hunter. Beside him, the god of light and music, Apollo, is identifiable by the musical instrument that he carries, his lyre, and finally, Hermes leads the front of the procession. With his winged boots, traveler’s hand, and unusual scepter topped with twisting snakes (the caduceus), Hermes is shown in the guise of the traveler, ushering the procession on to Mount Olympos where
Herakles would become a god.
Herakles was in fact already half-divine, as the son of Zeus and the mortal woman Alkmene. The adulterous nature of his conception caused Zeus’ wife, Hera, to take an immediate dislike to Herakles, and the hero is haunted by the goddess throughout his life. According to legend, Hera sent a fit of madness to Herakles, causing him to brutally kill his children. He ultimately left home in search of purification from his blood guilt, and the
prophecy of the Oracle at Delphi was the catalyst for the 12 labors that he performed for Eurystheus, the king of Tiryns and Mycenae.
- Rachel G. Beaupré, Andrew W. Mellon Assistant Curator, November 2011