Phenomena seen from a Glass 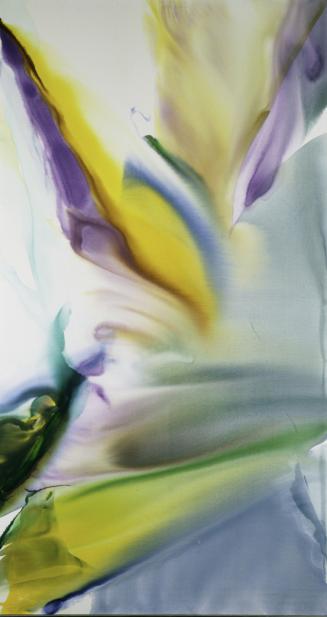 American abstract expressionist Paul Jenkins painted with his canvases lying flat on the ground. Using a bone knife, Jenkins moved and pushed his paint around on the surface. Once satisfied with the composition, he would allow the drying process to form the final details of the work.

The composition of Phenomena seen from a Glass is divided on a diagonal, with the lower area dominated by thin applications of blue and green paint and the upper by an explosion of purple and yellow. The colors resemble overlapping veils that hint at a sense of depth without defining the spatial relationship between them. If there is a narrative here, it involves the story of the work’s creation: the painting is an echo of the very process that made it. Jenkins was responding to contemporary art criticism, which insisted that painters address only issues true to their medium: color, texture, and the flatness of the canvas.

In 1948, psychologist Carl Jung wrote an extended introduction to D.T. Suzuki’s Introduction to Zen Buddhism, a text that became critical reading for artists in the following decades. In Jenkin’s painting, there is a tension between control and chaos that reflects several of the interrelated philosophical beliefs that emerged from this seminal publication. Like many of his contemporaries in New York in the 1950s and 1960s, Jenkin’s strove to remove his conscious ego from the process of creating a work of art. Through a Zen renouncement of self, he attempted to be a vehicle for a universal visual language.