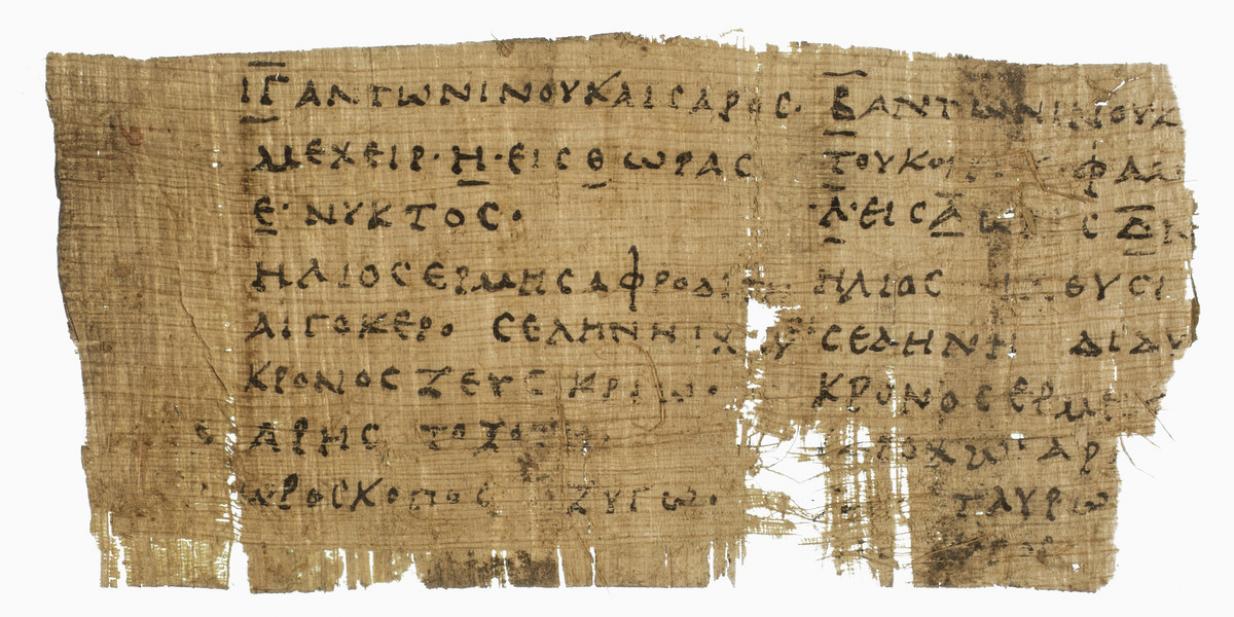 Ancient rubbish dumps in the desert at Oxyrhynchus and several nearby sites were so rich in discarded papyri that “merely turning up the soil with one’s boot would frequently disclose a layer.” So wrote British archaeologist Bernard Grenfell, who, along with Arthur Hunt, uncovered documents numbering in the hundreds of thousands in the area from 1896 to 1914. The papyri, written primarily in Greek, date to the Ptolemaic and Roman Periods and include literary texts, mathematical treatises, letters, administrative documents, and even horoscopes. Grenfell and Hunt made their discoveries under the auspices of the Graeco-Roman Branch of the Egypt Exploration Fund, which began a publication series on the documents that now runs to 67 volumes.

It was natural for the documents to be written in Greek, for Oxyrhynchus was a Greek settlement, founded after the conquest of Egypt by Alexander the Great in 332 BCE. But even if the examples on display here, which date to the 2nd century CE, had been found elsewhere in the country, they might have been written in Greek, for the use of that language had become widespread throughout Egypt by that time, and documents in the local tongue were on the wane. The fragile scraps were mounted between plates of glass before they arrived at Mount Holyoke in the first decade of the twentieth century, and they still reside in their original mounts. The Oxyrhynchus finds included texts from well-known authors, including Euclid, whom we still associate with geometry, the poet Pindar, and playwrights Euripedes and Sophocles.