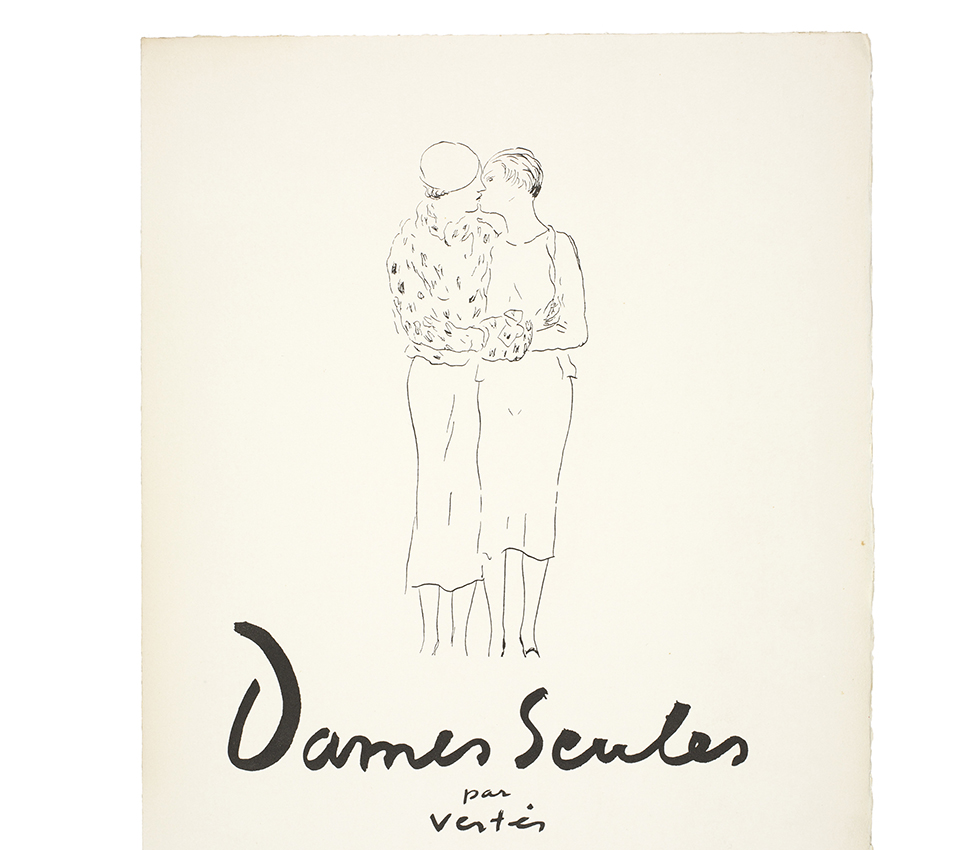 I was recently tasked with reviewing approximately 45 artists’ books, a bequest from Helene Brosseau Black (Class of 1931), that had remained untouched in storage for perhaps 30 years. These books contain prints by notable artists illustrating classical texts or commentaries by contemporary authors. “Look through them, take some notes,” Aaron Miller, Associate Curator of Visual and Material Culture, advised me, “see if there’s anything interesting.” 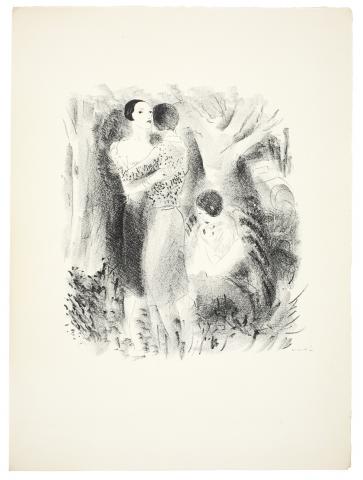 After paging through a few, I stumbled upon one that caused me to do a double take: I saw before me depictions of women in intimate relationships—holding hands, cuddling in bed, strolling through a park together. It wasn’t necessary to understand French, the language of the accompanying text, to grasp the subject of this book: queer relationships between women* in early 20th-century Paris. Despite the difference in language, era, and culture, I felt a deep sense of connection to these images of women who shared my identity. I was finally seeing myself in art.

Interest piqued, I used the internet to search the title of the work, the artist, and all the keywords I could think of to try and find out more about it. The results were disappointingly small and inconclusive—I couldn’t find a concrete reference to this work. I was reminded that art history often erases minority stories. With this blog post, I hope to augment the literature about queer art and bring this history out of the storage closet.

This book dates to 1932 and is by French artist Marcel Vertès, a painter and illustrator best known for scene and costume design in the 1952 film Moulin Rouge. The title, Dames Seules, translates to “single women,” or “women without husbands.” The illustrations are accompanied by narration and an introductory text by French author Francis Carco. Anouk Alquier, a French instructor at Mount Holyoke, assisted me with translations and contextual information.

Queer activity in France and other western countries became visible with the advent of sexology in the late 19th century. As Sigmund Freud and other sexologists debated women’s sexuality and lesbianism, the public obsessed over the types of deep relationships between women that would have once been innocuous. Additionally, World War I offered new employment opportunities for women, as men were away fighting. The suffrage movement and development of women’s colleges offered educational and political advancements, making women the intellectual peers of young men for the first time. The “New Woman” emerged as an unmarried, educated, economically autonomous, and sexually liberated figure who challenged traditional gender roles and, thus, political power. Many of these women were also queer, so the two identities became intertwined throughout 20th-century history. No wonder so many artists like Vertès rushed to their canvases to depict this modern phenomenon! 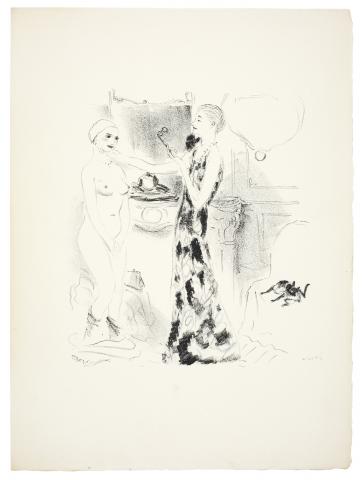 (1) In one example of a scene in the book, loose outlines of figures dance and sit together in intimate pairs. Rough shading contrasts with the natural landscape and the emotions of this sultry night. Undefined borders make the scene come to life and flow off the page. Vertès’ style mimics the free, bohemian attitude of the modern women he is depicting. Almost like a camera panning over a scene, the viewer feels like they are given a quick glimpse into 20th-century Parisian queer life.

(2) In a different scene, a nude woman who appears to be the new maid, clasps her hands and smiles shyly, awaiting approval from her employer. Donning a sleek dress, the older woman holds the maid’s chin in a gesture of both comfort and flirtatious appraisal. She says, “You will not have much work my girl, I’m alone.” In contrast to their demure interaction, her dog unabashedly grooms itself, subtly foreshadowing the more sexual relationship that might develop between the two women.

(3) In the final scene of the book, Vertès depicts women at a party wearing an array of fashions. As women’s roles transformed following World War I, their style also became more boyish. Women rejected corsets; they wore drop waist dresses, higher hemlines, and bobbed their hair to de-emphasize their feminine figures. This became the trademark look of the new woman. Many queer women, like the leftmost one in this print, “queerified” this look by wearing men’s jackets and ties, smoking cigarettes and sporting a monocle. (The monocle was such a prevalent queer icon that there was even a popular lesbian nightclub in Paris named “Le Monocle.”) In this print, Vertès provides viewers with a range of fashions to match the spectrum of sexualities and gender identities represented at this party. 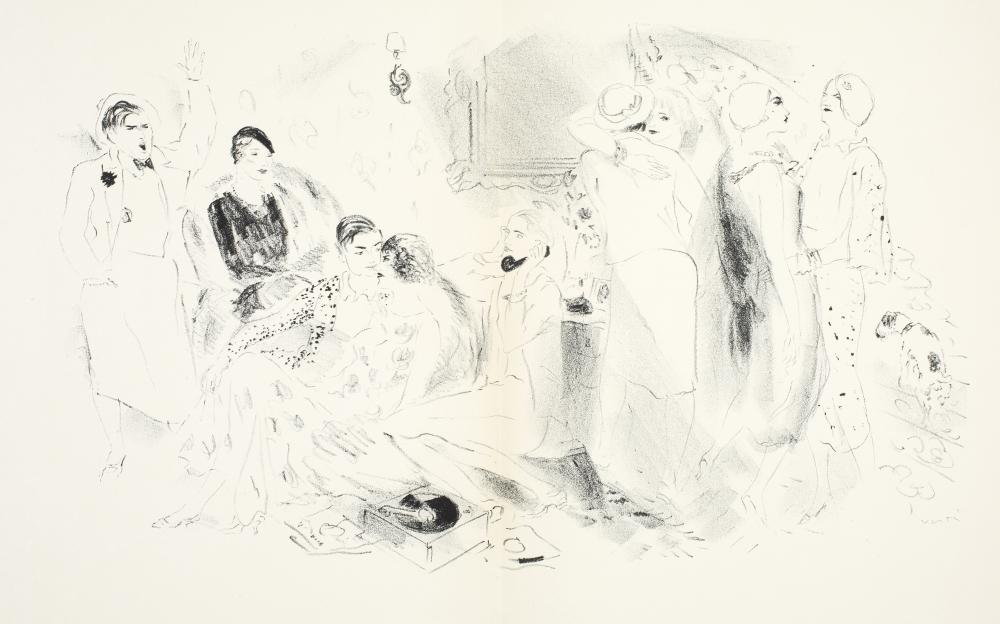 Although I reveled in the opportunity to research a subject close to my heart, the process was not without some harsh reminders of the discrimination faced by queer individuals in the not-too-distant past, and society’s limited knowledge of LGBTQ issues. While seeing historical depictions of queer women was refreshing, the paradox is that these women’s stories are being told by a heterosexual man. The story’s illustrations feel overtly sexual and hyper-emotional, feeding male voyeuristic taste rather than serving the population Vertès is depicting. The women’s outfits are far more detailed than their personalities, again diminishing individual queer identity. The introductory text also enhances this idea, as Carco writes condescendingly about the lack of “virtue” in lesbians, concerned for his sons’ and grandsons’ futures.

Despite these revelations, the book is a reminder of how much progress Western society has made on these issues. A century ago, if these women’s stories were discussed, it was by psychologists or men in obscure art or texts. Now, LGBTQ identity has more facets than a modern woman could dream of and those identities are beginning to be depicted in movies, TV shows, books, art, etc. LGBTQ people are certainly still underrepresented and underprivileged, but I think the kinds of people depicted in this book would be pleased to see how far we’ve come.

In my efforts to bring this history out of the closet, I want to re-imagine what this work could be. If I could recreate this book, I would include more representations of race, religion, disability, and class, among many things. Perhaps these people would be traveling, creating families, exercising political power, attending school, and working – many facets of modern queer life. I hope more art like this gets discussed and created to inspire a new wave of literature about queer art history and shut that closet door forever.

* I refer to the people depicted in this book as “women” in accordance with the title of the book, but note that these people might not all identify as women, especially with current gender terminology. As such, I will refer to the relationships depicted as “queer” and “lesbian” to encompass the language of both that era and the present.