My Senior Project in the Making

Jennifer Villa '21 describes the artistic influences that shaped her senior project, Upon my Back, and the process of its creation. 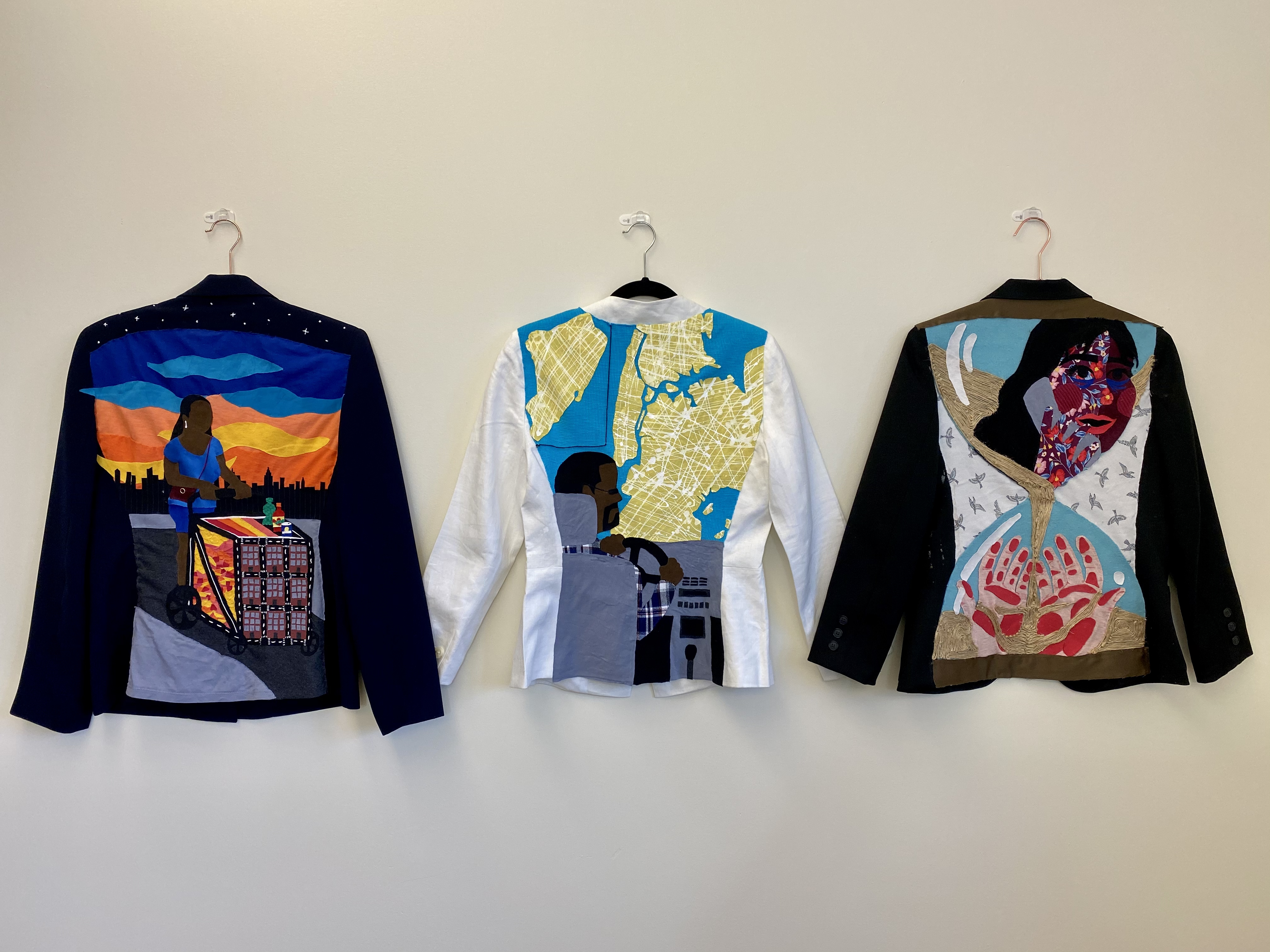 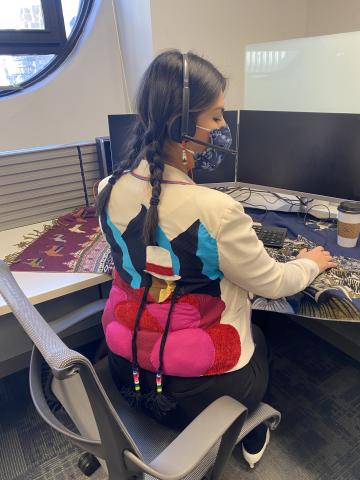 During my first year of college, I began working at the Mount Holyoke College Art Museum as a Community Engagement intern. Little did I know that the Museum staff who interviewed me would become a part of my MoHome family. Throughout my four years interning at MHCAM, I held different roles and had the opportunity to learn about the Museum from various perspectives. Being an art studio major, my favorite part was being able to personally meet several visiting artists over the years. Each one was very special and their artwork blew me away everytime. Images of their art stayed with me and inspired my eventual path to work with fabric and personal histories.

One of the first artists whose work I had the pleasure to interact with was Mary Lee Bendolph. The intimacy of the worn fabrics used to create her quilts impacted me because I wasn’t just seeing one thing she made, I was gazing upon years of history. In pieces such as Ghost Pockets, she reworked the fabric to document or honor different moments and people in her life. There is a lively aspect to these abstract works. As beautiful as these textiles were hanging in the gallery space, the warmth they emanated made me want to curl up in the blankets.

Bisa Butler was another artist whose work astonished me. Her attention to detail is immaculate and her bold patterns somehow come together seamlessly to give off the illusion of a grand painting. Standing in front of her quilt Broom Jumpers was a surreal experience. Each piece of fabric blended into the next like butter and despite the bright color palette, the people portrayed came to life. It could have been the shine in their eyes, their expressive faces, or even the way the shadows on their clothing gave their bodies volume. Butler was able to capture the essence of these unidentified people from a photograph she discovered in the historical archives. She transformed a picture of people she had never met, and standing in front of them, I felt the familiarity of meeting them.

Martine Gutierrez was the embodiment of a star when she came to MHCAM. From descending the auditorium stairs to begin her lecture to the generous way she engaged with students during a private dinner, her personality and dedication to her craft amazed me. With a work such as Indigenous Woman, her drive to make an entire magazine challenging popular culture, gender norms, and mass media pushed me to question the parameters by which we live and explore life.

Hector Dionicio Mendoza was the last artist I had the pleasure to meet and he left the biggest impression on me because he reaffirmed my desire to be a working artist. The way he explored immigrant topics through art had a poetic quality. His pieces resonated with me as a child of immigrants with a very different upbringing than most of my peers. I love his piece Immigrant Shoes because I have always felt like each “American experience” I had was colored by my Peruvian upbringing. It made me realize that art about my culture and my experiences was important and meaningful to others. 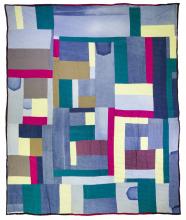 All of these artists influenced the creation of my senior project, Upon my Back. Upon my Back began as one decorated blazer in response to the book Cholas and Pishtacos by Mary J. Weismantel. I was learning more about my Peruvian heritage through an anthropologist who had researched Andes culture. There were so many parts of this book that took me aback because they were things I had experienced or been told growing up. These traditions or what I considered to be just ways of living were actually being studied by an anthropologist. It was interesting to see them from her perspective and interpretation. A big part of this book focused on cholas, women of the Andes. Cholas are described as “neither Indian or white enough,” a mestiza in short. She is a businesswoman, going into town to sell her goods, but she is also considered sexual and exotic. Even though she doesn’t fit in any category she is regarded as a symbol of the nation. My grandmother Isabel Ortiz was a chola, and although I never got the chance to meet her, learning about cholas made me feel closer to her. My dad had always told me stories about her moving through different districts of Cusco, Peru to sell fruits. My grandmother had only attended school until 1st grade yet my dad would say she never got her accounts wrong in the marketplace. I decided to portray her image on the back of one of my blazers to never forget her when I walked into institutions that made me feel out of place. I might not fit in but that doesn't diminish my worth. 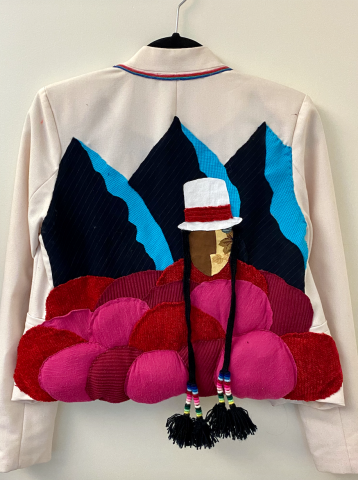 While working on the blazer I looked at Mary Lee Bendolph and Bisa Butler’s art. Bendolph’s work inspired me to use all recycled fabrics. As she has stated, they were easier to manipulate because they had already been broken in and carried meaning from those who had worn them. I also let colors and broader shapes convey my imagery instead of making the portraits hyper realistic. In Butler’s work, I focused on the way she composed her figures within the quilts and the creative use of different textures to create forms.

Placing my grandmother on the back of my blazer, I carried her story with me into my work place during the pandemic. I visualized Martine Guetierrez’s theatrics and carefully put together my outfit that day. I was working at a call center so I still had to make sure to stay within the dress code. It was empowering to show off a part of my history in this way. Many of my coworkers asked about the imagery on my blazer. As I explained the concept behind it, they asked if I would be open to making some for others. These conversations made me realize that virtually every immigrant or immigrant child had a similar story surrounding labor and culture. It made me question why business/professional attire was attached to black, whites and navy blues when people’s histories are so colorful. The universal business attire is a business suit. So by using a blazer as the blank canvas for the immigrant story, the wearer takes ownership of their story in a place where they would usually try to assimilate instead of standing out. With a new look, the blazer makes an intervention in the American Dream narrative.

I came back to campus for my last semester determined to work with the oral histories of first generation college students to continue my portrait blazer series. Working with this group of students was especially important to me because there is a lack of documentation of immigrant/first gen voices on college campuses. First generation college students struggle finding their place in college because they often have a very different background from the one traditionally supported in most higher education institutions. I started with a board shoutout on Instagram to see who would be interested and I received so many responses that I narrowed my focus to first generation Latinx college students with immigrant parents. Inspired by Hector Dionicio Mendoza, I wanted to work with a community that I was a part of and, in a way, give back to them. I wanted this project to serve as a visual archival collaboration instead of simply my take of their stories. 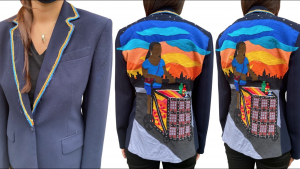 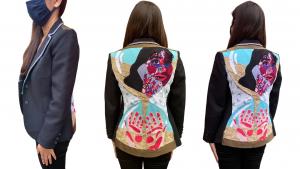 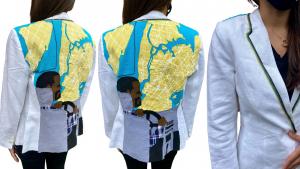 I ended up working with three students who had parents who had immigrated from Peru, Mexico, and Dominican Republic. I conducted 45-minute interviews with each of the students exploring the connection between first generation college students and their immigrant parents through the memories of each student’s parent/guardian’s labor. I explored various questions including but not limited to: How did the amount and type of labor the parents engaged in affect the relationship between them? How was labor talked about in their family? Was it a central issue that their lives revolved around? How is their perception of life now different because of the labor their parents did? How does pride play a role in their outlook on labor? Talking through these questions and hearing their stories I realized that this work was more than archival, it was also acting as an intervention on the intergenerational dialogue around labor. 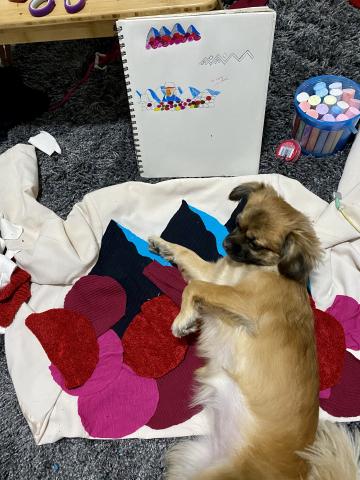 I worked through sketches of possible visual depictions. During this early stage, I played back the recording of the interviews to make sure I was capturing what they conveyed to me. Each blazer took approximately 3 weeks to complete. I called the first one Fruit Vendor, after the occupation of the student’s mother. I captured her early morning routine of rolling out her fruit cart, dressed her best, and carrying the knowledge of her area to know when and where to strategically sell the fruit. The second one is called Este tiempo va pasar (This time will pass). I composed the image in the shape of an hourglass to emphasize her parents’ struggle with time as they juggled various jobs with odd schedules. At the top of the hourglass her mom, who is still in Peru, calls her daughter to make sure she is doing well. Her facial features are tired and her cheeks chapped from being in the sun. In the bottom half, her father tries to support her through his physically demanding work that leaves his hands swollen. The flying birds in the background also add to the symbolism of immigration. The last blazer is called 5 Borrú. The word borrú is actually the phonetic spelling of how Spanish speakers pronounce the word borough. The student’s dad was a taxi driver while she was growing up and she remembered him studying the NYC map to be able to know his routes. When talking about the boroughs he would always pronounce it borrú and it took a while for her to realize what word he was saying. This was a conversation we bonded over because growing up there were various words I thought were Spanish but later came to realize were just mispronounced English words.

I was overjoyed to be able to present these works as part of my senior symposium talk as well as in the Class of 2021 studio art virtual exhibition, Long Distance Relationship. Moreover, it was wonderful to work in collaboration with the students who volunteered their time and stories to make this body of work possible. I have learned so much during my time at Mount Holyoke College and I would say equally as much from the Mount Holyoke College Art Museum and the programming and mentorship they made available to me. My journey finding my artistic voice started here and I am so excited to see where it will continue.